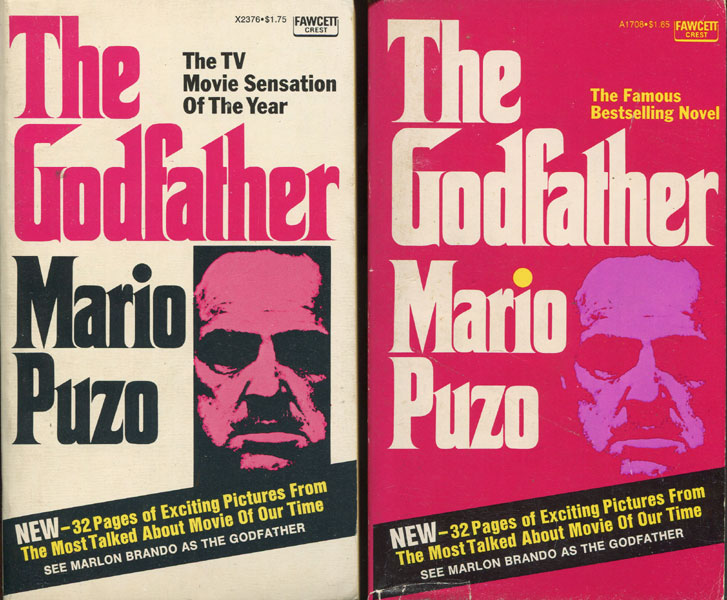 First movie edition [1972] and first TV edition [1974], each with the same 36pp. section of black & white photos from Francis Ford Coppola's hugely successful film, which received seven Oscar nominations and took the awards for best picture, best script (Puzo & Coppola), and best actor; Marlon Brando in the title role. Bookplate signed by Puzo laid-in. The two paperback editions are virtually identical, internally as well as externally, with four important differences: (1) the cover of the first (movie edition) version is red, with title and byline in white; the cover of the second (TV edition) version is white, with title in red and byline in black; (2) both covers bear the same black and yellow banner, highlighting the 32pp. photo insert and touting the movie, but where the movie edition has the words: "The Famous Bestselling Novel," next to the title, the later TV edition says,"The TV Movie Sensation of the Year;" (3) the publisher's code numbers on the front cover and spines are different, and the price of the TV version has been increased $1.65 to $1.75; (4) the lists of other Fawcett Crest books on the last page of each volume are different. There is a small edge nick at the bottom of the front cover of the movie version, otherwise both copies are near fine and unread with no evidence of reading creases. Because of their bulk of 500pp and being one inch thick, these perfect-bound mass market paperbacks are seldom found in collector's condition. For the two variant paperback editions, with one signed bookplate.

The West Of William H. Ashley, The International …
by Dale (Editor). Morgan