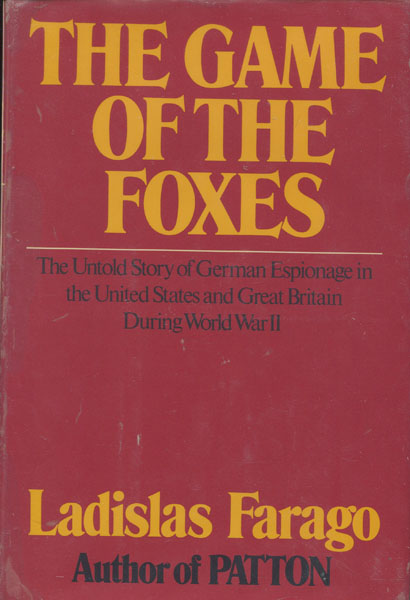 The Game Of The Foxes. The Untold Story Of German Espionage In The United States And Great Britain During World War Ii

Other works by LADISLAS FARAGO

First edition. Thick 8vo. Signed by the author on the front free fly leaf. Two-tone cloth and decorated boards, red front and rear endpapers, xxi [blank], 696 pp., introduction, chapter end notes, epilogue, bibliography, index. "At the end of the War the U. S. forces captured the German State Archives. Buried and unopened in this overwhelming mass of documents was a metal footlocker containing on microfilm the secret records of the Abwehr organizations conducting these operations. Inscribed therein was every name - real and cover - of every agent, every mark spent, every report received, every order given."