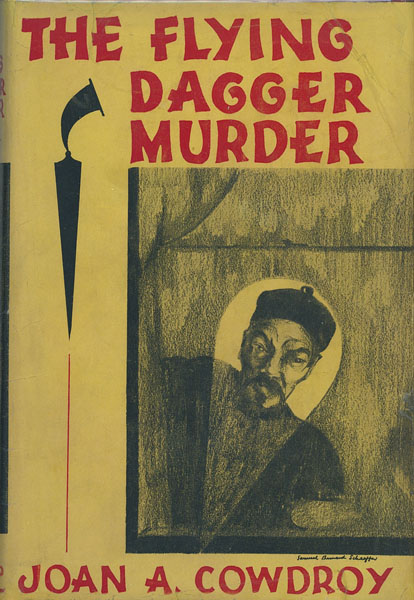 Other works by JOAN A. COWDROY

First U. S. edition. With a brief autograph sentiment laid in: "With the cordial wishes of J.A. Cowdroy." Fine, bright copy in dust jacket with light professional restoration to the spine ends, corners, and extremities. Joan Alice Cowdroy (1884-1946) was an English author of 20 novels, most of them well-received romances, whose career in crime fiction began with the publication of The Mystery of Sett in 1930, which introduced her series detective Chief Inspector Gorham of Scotland Yard. Her second novel, Watch Mr. Moh! (US title The Flying Dagger Murder), marks the debut of Li Moh, who several sources have cited as being the first Asian detective. Cowdroy describes Mr. Moh as a Chinese-born gardener who may or may not have been affiliated with the San Francisco Police Department before moving to England, where he assists Chief Inspector Gorham in search of a historic necklace through dodgy London nightclubs, shabby slums, and sinister docks. Crime solving literature (usually involving district magistrates or judges) can be traced back to the Song and Ming dynasties, and the late 1920's through the late 1950's saw a steady emergence of Asian figures in mystery and crime fiction (Biggers's Hawaiian-Chinese detective Charlie Chan, Marquand's Japanese secret agent Kentaro Moto, and Wiley's Mr. Wong all come to mind). Some of the available literature argues that Chan, Moto, and others are Americanized characters who conform to Asian stereotypes, and Li Moh, to some degree, falls into the same category. While perhaps not the first, still an early example of the East Asian detective in 20th century fiction. Scarce.