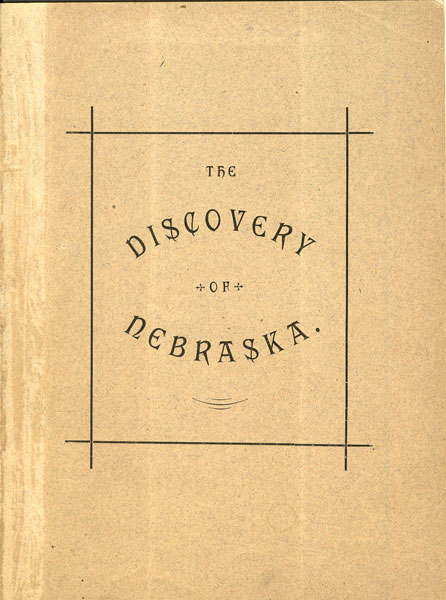 The Discovery Of Nebraska. Read Before The Nebraska Historical Society April 16, 1880

8 1/8" x 6" in tan printed wrappers. 42 pp. "We are apt to look upon Nebraska as a young state; young in its geological formation, in its political existence, and in its historical records. For descriptions of its soil, its climate, its fruits, or its inhabitants, few have sought to look further back than the commencement of the present century, and the published memorials of its history prior to the advent of the French trappers and traders have thought too meagre to serve as a basis for any exact account. But hidden away in the lumber rooms of wealthy Spanish and French families, and piled on the shelves of national libraries in Paris, Madrid, and Mexico, are hosts of letters, journals, and reports which are gradually emerging from their seclusion and undergoing the scrutiny of acute and practiced eyes. The documents recently edited by M. Margry, in Paris, and now in course of publication by the United States government, throw a flood of light upon early French discoveries and explorations in the West. And when the vast libraries of all the nations which took part in those adventurous travels shall give up their dead treasures, we have reason to hope that we shall be able to add many years to the authentic history of our state." In this speech, the author presents a few of the reasons to believe that Spanish explorers visited present-day Nebraska 80 years before the Pilgrims landed. In his presentation he explores the origin of the "seven cities of Cibola" and the early Spanish explorers, including Coronado. "When, a few years since, a paper was read before this society, containing some reasonable grounds for belief in the theory that Coronado, in his expedition to the mysterious kingdom of Quivira, reached the territory now embraced within the state of Nebraska, there was little foundation for an argument that the gallant and uxorious knight marched any considerable distance beyond its southern boundary. The relation of his patient and painstaking follower, Castaneda, and his own report, left him at the fortieth parallel of latitude, now the dividing line between the states of Kansas and Nebraska; and the only reason for supposing him to have prolonged his journey farther to the north was the difficulty of believing that so adventurous a soldier would have turned back until he was stopped by some natural obstacle at least as formidable as the Platte or the Republican river. From the sources of information then at hand therefore, the author of that essay, while, suggesting that he may have reached the Platte, was inclined to place Quivira south of that stream, and somewhere between Gage county, in this state, on the east, and Furnas on the west." Two light vertical creases along with rubbing at spine and very light soiling. Very good.

Memory And Fellowship Book For A Student At …
by Elizabeth Brooks