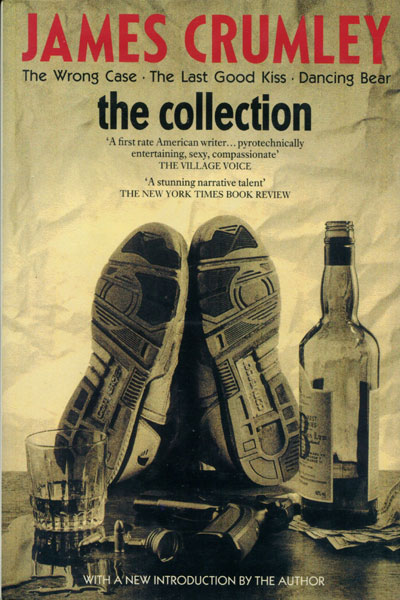 First edition of this omnibus edition of his Crumley's first three crime novels, The Wrong Case, The Last Good Kiss, and Dancing Bear. Inscribed on the title page by Crumley. Contains a new Introduction by Crumley. Fine in dust jacket lightly wrinkled at spine ends. In The Wrong Case, Milo, a down-and-out PI, is contacted by Helen Duffy to help locate her missing brother. When Milo begins to investigate, he finds himself tangled in murder, dope-dealing, a love affair, and a cast of seedy but colorful characters -- Simon, the disbarred drunk; Lawrence, a glitter freak with a penchant for lavender and leather; Nickie, a tavern-owner with secret ambitions; and Helen! She has led Milo to believe that she wants to find her missing brother, but she too has ulterior motives! In The Last Good Kiss, PI Sughrue and poet/novelist Trehearne are in search of Betty Sue flowers, a barmaid's daughter who disappeared ten years ago. Some insist that Betty Sue is dead -- her body lost in the river after a car accident. They even have the death certificate to prove it! But then, a postcard arrives from Betty Sue -- the trail is faint but Sughrue and Trehearne quickly learn that she has made a porn flick and has spent some time in prison -- the result of something to do with the mob. And finally, in Dancing Bear, Milo is hired by a nosey, rich woman to spy on two people -- a man and a woman who sit in their cars for about an hour or so every Thursday afternoon. the woman wants to know who the two people are and what they talk about. Seems pretty simple but .... soon the man Milo's tailing is killed in the exploding car that he's driving; Milo finds a live grenade wired to the clutch petal of his rental; in the Toyota Milo finds two submachine guns, ammo, grenades, and a kilo of marijuana and bag of coke. Suddenly, Milo is on the run. An action-packed thriller!!

Rules Of The Game.
by Ted. Allbeury

The Devil's Diary.
by Patrick. Mcginley