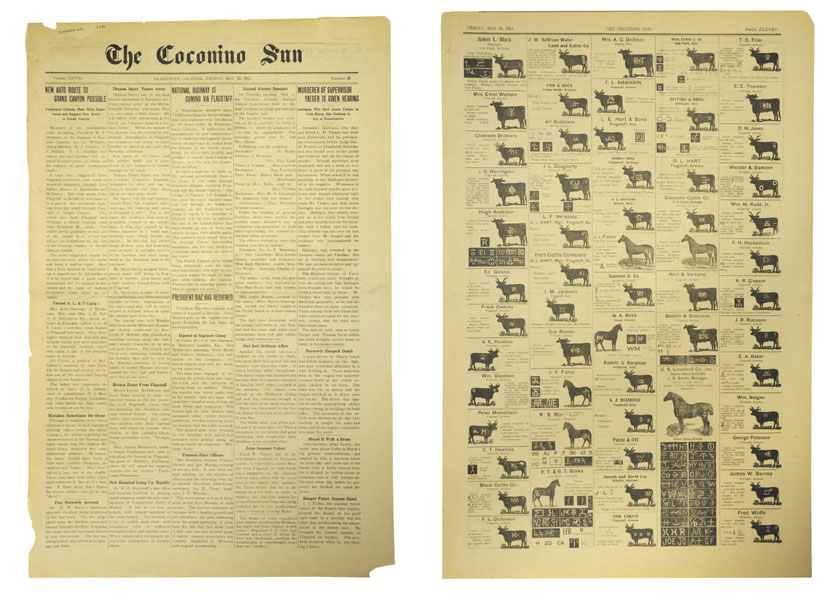 Other works by THE COCONINO SUN

First edition. 13" x 20" newspaper issued by The Coconino Sun of Flagstaff, Arizona, Friday, May 19, 199, Volume XXVIII, Number 25. This newspaper is a descendent of the Arizona Daily Star, Tombstone's Daily Nugget, Arizona Daily Sun, the Mohave Miner, The Coconino Sun was named by Clarkson M. Funston, its editor, to coincide with the founding of Coconino County, with Flagstaff as the county seat. However six months later the name of the newspaper was again changed to the Coconino Weekly Sun. In 1896 attorney Jerome Edwin Jones, owner of the rival newspaper, the Flagstaff Democrat, purchased the Coconino Weekly Sun and merged the two newspapers into the Flagstaff Sun - Democrat. Then due to Flagstaff's nickname being the Skylight City, Jones once again changed the name of the newspaper on November 25, 1896, to the Skylight Kicker, as he promised "to kick higher, quicker, truer, harder and more than any newspaper in the West." However on January 15, 1898, Clarkson M. Funston re-purchased the newspaper and changed the masthead back to the Coconino Sun, which then became the area's dominant newspaper. The newspaper carries news pertinent to northern Arizona and continued to be published into 1978. This newspaper issue being offered for sale is a weekly which was published each Friday of the week and this copy was published on Friday, May 19, 1911. Its contents include news of the territory, news of local citizens and their various journeys and events, the murder of a prominent official, Base Ball Dope, church directory, Probate Court notices, range and market news, advertising, educational articles, lumbering, railroad news, and everything that was fit to print. The importance of this issue is that it shows 72 ranches with over 125 of their brands on cattle and horses. The ranches are from the communities of Canyon Diablo, Ash Fork, Flagstaff, Williams, Cornville, Winslow, Camp Verde, Dewey, Seligman, Maine, Sedona, and Jerome. The six pages are separated and in very good condition.