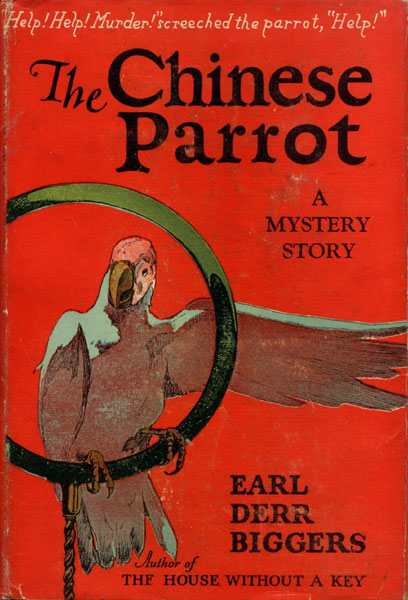 Later edition. Three tiny holes along channel of front cover, else fine, bright, square copy in a lightly rubbed dust jacket. Bob Eden has been a young man about town until his father brokers Sally Jordan's expensive string of pearls, and he is sent to meet her former houseboy, Charlie Chan. He and Charlie head to the desert to meet the buyer, famous and powerful businessman J.P. Madden. Rather than quickly part with the pearls, after hearing the words of a Chinese parrot indicate that something terrible had happened prior to the men's arrival, Chan decides to pose as a Chinese cook to try to discover exactly what had happened. In the meantime, Eden is to stall the insistent Madden long enough for Chan to investigate. Suddenly the parrot dies. Harboring suspicions that a man has been murdered, the difficulty for Bob and Charlie rests in discovering who the victim was and who murdered him. An exceptional copy.

Valley Of The Shadow.
by Brian. Garfield

Frontier Of Fear.
by Michael. Hartland