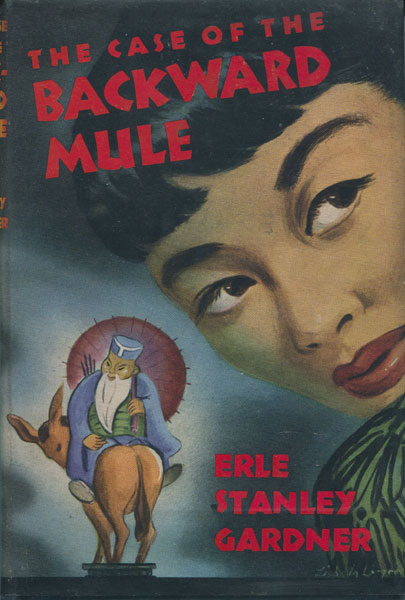 The Case Of The Backward Mule

First edition. Former owner's bookplate on front pastedown sheet, else fine in price-clipped dust jacket with light professional restoration to head of spine and to a small closed tear to top edge of rear panel. Terry Clane, just back from China where he had been working on a secret government mission, runs into murder when he arrives in San Francisco. Whisked straight to police headquarters, Terry uses all the powers of intense concentration he learned in the Orient in order to beat the lie detector. Quickly realizing that despite his absence, the police think he knows about the escape of a convicted murderer. Cynthia Renton, who was once Terry's fiancee, has also disappeared. Was she implicated in the escape? Where would she hide a fugitive? Terry's mind flew to Sou Ha, the daughter of his wisest Chinese friend, in her luxurious home in San Francisco's Chinatown. How far would Sou Ha's loyalty to Terry take her? Sight of the old Chinese figure of Chow Kok Koh, riding backward on his white mule, shocked Terry. He had given that figure to Cynthia. What was it doing now, stained with blood, a clue in a brutal murder?

The Brotherhood Of The Seven Kings.
by L.T. And Robert Eustace. Meade

The Fools In Town Are On Our Side.
by Ross. Thomas

Sacramento County, In The Heart Of California