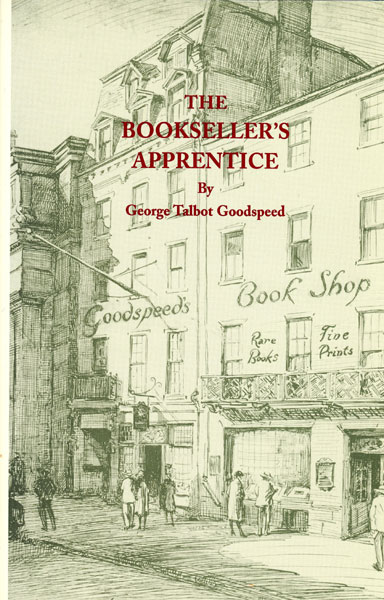 First edition. 8vo. Limited to 750 copies. Cloth, xv(1), 181 pp., publisher's foreword, frontispiece, illustrated, appendices, acknowledgments. For nearly a century, Goodspeed's in Boston was one of the world's preeminent rare bookshops. The firm was founded in 1898 by Charles Eliot Goodspeed, who recorded the shop's early history in his book, Yankee Bookseller, published in 1937. The Bookseller's Apprentice is written by Goodspeed's son, George, who worked at the shop, first as an employee, and then as its director for over 70 years, from 1924 until the shop closed in 1995. In this book, the younger Goodspeed describes the rarities which passed through the elder Goodspeed's hands, great collectors with whom he dealt such as Frank B. Bemis, J. K. Lilly, and Carroll A. Wilson; his friendships with writers Robert Frost, David McCord, and Edmund Wilson. These reflective pieces provide much more than a continuation of Goodspeed's history; they are unique glimpses into one of America's most distinguished rare book firms. Fine, bright copy in dust jacket.

Bell Ranch As I Knew It.
by George F. Ellis