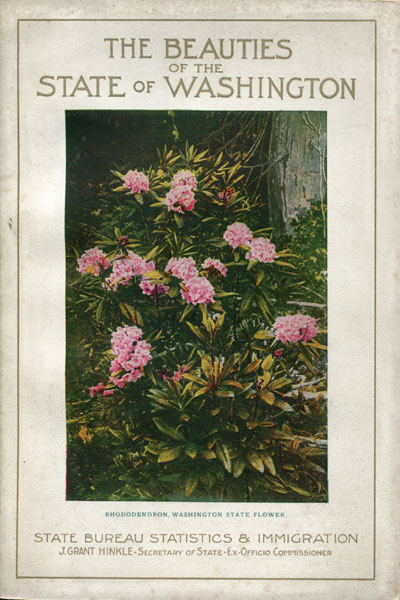 The Beauties Of The State Of Washington. A Book For Tourists

9-1/4" x 6" colorful picture of pink Rhododendron, the Washington State Flower to the front wrapper with the "Seal Of The State Of Washington" in gilt on the rear wrapper. 116pp. including wrappers. Numerous black and white illustrations. Seven color plates. Table of Contents. Full Page Illustrations. Map. Offers the history of Washington, the most northwesterly state in the Union, named for the "Father of His Country" and called the "Evergreen State." Information about several mountain ranges such as Mount Rainier, Mount Adams, Mount St. Helens, Mount Baker, Mount Stuart, Glacier Peak et. al. Much information about the forests, climate, Puget Sound which is ideal for yachting and cruising, The Harbor Country which is the only part of the state that you may enjoy the rare combination of the unobstructed ocean, an inland sea and trout streams lined with giant firs and cedars. Mount Rainier National Park and all of its wonder and beauty is described along with the wonderful and majestic Columbia River. Much information about the Inland Empire, scenic highways, fishing and hunting, cities and suggested trips and 1 page devoted to Alaska, their ally. The black and white illustrations include "Looking Across The Cascade Mountains," "Yachting On Puget Sound," "Surf On Washington Coast," "The Yakima Valley - Mount Adams In The Distance," et. al. A few of the color plates include "Mount Rainier Reflected In Mirror Lake," "Priest Rapids - Saddle Mountains Behind," "One Of Many Luring Streams," et. al. The black and white map is 8" x 11" and is bound into the inside of the rear wrapper. It is entitled "Map Of Washington" showing State Highways, Principal County Roads and Railroads. Light soiling to front and rear wrappers, reinforced with linen at front and rear wrapper crease, page 59 has a 1" closed tear not affecting the text. Very good.

George Scarborough. The Life And Death Of A …
by Robert K. Dearment

Rattle And Prattle. For Little Carriage Makers And …
by Murphy And Co