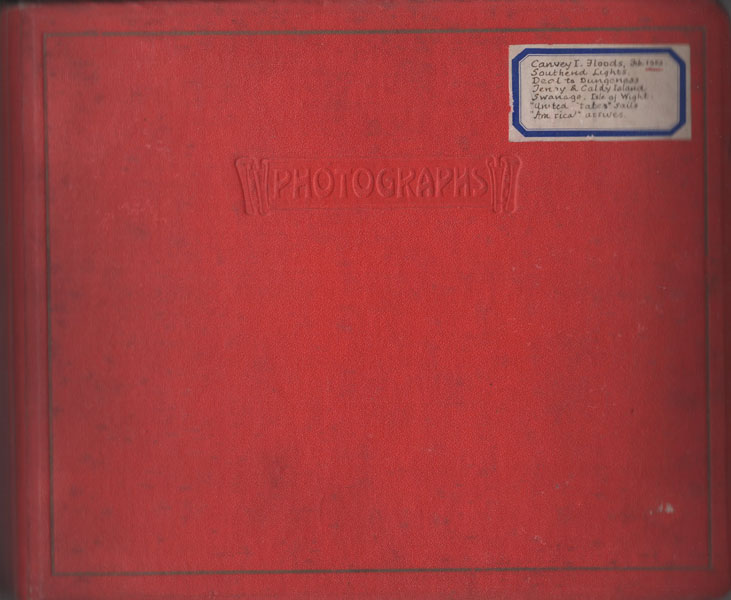 Photograph album containing 236 pictures glued to thick stock paper and housed in 8 1/2" x 10" red leather boards with gilt border and raised title (Photographs). 114 pp. Contents. Photographs are mostly black and white or sepia toned and range in size from 2" x 3" to 5" x 4 1/2," with most being 3 1/2" x 5." First 15 photos are of the Canvey flood. When floods devastated large parts of the East Coast on January 31st and February 1st, 1953, Canvey Island in Essex was one of the places that bore the brunt. Fifty-nine people died and 13,000 were evacuated from their homes after floodwater engulfed the island. This group of photos is followed by 13 pictures of the lights on Southend Pier in Essex. Southend Pier is a major landmark in Southend-on-Sea. Extending 1.34 miles into the Thames Estuary, it is the longest pleasure pier in the world. Additional pictures include Deal, Dungeness, the Goodwin sands, Kingdown, St. Margarets-at-Cliffe, St. Margaret's Bay, Dover, Folkestone, Hythe, Romney Marsh, Rye, Tenby, Pembroke, Caldey Island, Swanage, Isle of Wight, Port of Southampton, etc. Photos include street scenes, masts of ships lost on the Goodwin Sands, castles, rural scenes, churches, fishermen, railroads and trains, homes, villages, harbor scenes, cliffs, villagers, etc. plus 11 port scenes showing the American liner "United States," pictures aboard the ship, tugs leading the ship, etc. Final photograph is of the ship "America" arriving in Southampton. Several of the photographs include people going about their lives. Captions neatly written in black ink throughout. All photos are clear and bright with minor edgewear to pages. Boards are lightly soiled and rubbed along with rubbing to board edges. Very good plus. A beautiful collection of nicely annotated photographs.

A History Of Texas Artists And Sculptors
by Frances Battaile Fisk

Houston. A History And Guide
by Compiled By Workers Of The Writers' Program Of The Works Projects Administration In The State Of Texas