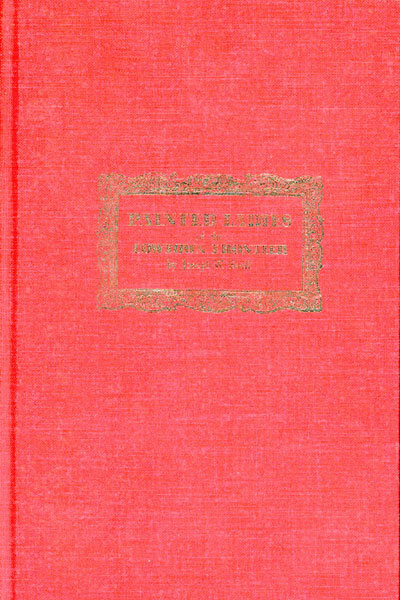 Painted Ladies Of The Cowtown Frontier

First edition. 8vo. Limited edition of 250 numbered copies signed by the author, this being copy number 1. Additionally inscribed on the title page to author, bookseller, and historian Tal Luther: "For Tal Luther - The best bookman in the West, Joseph W. Snell." Red cloth, titles stamped in gilt on the front cover, [4], 24 pp., illustrated, frontispiece, footnotes. Illustrations by Gus Shafer, Frank Steinman and Byron B. Wolfe. One of the first books written specifically on prostitution in Kansas cowtowns, providing extensive research on the prostitutes themselves including average ages, census listings, and fine rates in the various cowtowns. Six Guns 2059 says: "Tells about the killing of Ed Masterson, and has a mention of such gunmen as Bat Masterson, Wild Bill Hickok, Ben and Bill Thompson, and Rowdy Joe Lowe. It is strange that the author does not mention Wyatt Earp, though Earp's common-law wife was one of the painted ladies. I think the author is wrong in listing Rose of Cimarron as one of the cowtown prostitutes." The last illustration in the book is of a grave headstone : "Virginia Marlotte / Born 1854 / Died 1892 / Here lies the body of Virginia Marlotte / She was born a virgin and died a harlot / For eighteen years she preserved her virginity / That's a damned good record for this vicinity." Very fine copy without dust jacket, as issued.

Murdered On The Streets Of Tombstone
JOYCE AROS

Johnny Havoc And The Siren In Red.
JOHN JAKES