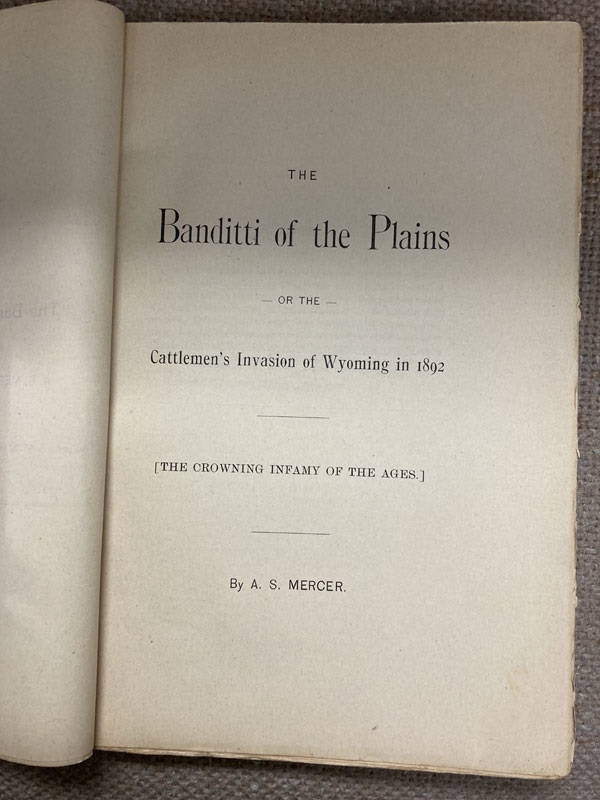 The Banditti Of The Plains, Or The Cattlemen's Invasion Of Wyoming In 1892. [The Crowning Infamy Of The Ages]

First edition. 8vo. This copy was never bound and is in the original front and rear endpapers, and is one of the copies stolen while in the court's possession and smuggled to Denver to be bound eventually, 139 pp., preface, introductory, illustrated. The original 1894 edition is one of the great rarities of Western Americana. Six Guns 1478 says "Exceedingly rare." The first edition of this book is one of the rarities of western Americana. It had a tempestuous history. "Immediately after it was printed, The Wyoming cattlemen objected to having their activities thus exposed, and in the course of a libel suit the entire issue was impounded by a local court and ordered destroyed. While the books were in the custody of the court, a number of copies were stolen and smuggled to Denver, which lay outside the court's jurisdiction. It is claimed that the books were unbound when they were stolen and were later bound in Denver." This account of the infamous Johnson County War was impounded upon printing due to a libel suit by the several big cattlemen who strongly objected to its content. Six Score 79: "One of the most famous range books. A lot of confusion exists about this book, due to its supposed suppression and the vitriolic nature of the content. Mercer, a promoter and newspaper editor, wrote the book as an attack on the actions of the Wyoming Stock Growers Association during the Johnson County War. The work is usually listed as being published in Cheyenne; however, both of Mercer's children maintain that it was printed in Denver." Mercer moved to Cheyenne in 1883 and started the Northwestern Livestock Journal. Because of this conflict, Mercer lost his advertisers and subscribers but the work would become the most famous book published in Wyoming. This is a very fascinating work with an equally fascinating tale. As side commentary ... Mercer was well-known for bringing marriable women to lonely bachelors in the northwest. He brought 46 women in 1865. Also in 1865, he wrote a small pamphlet entitled Washington Territory, promoting the Pacific Northwest. The women that were brought to Washington Territory in 1865 were known as 'The Mercer Girls.' Inked presentation inscription dated 1926 on first preliminary page, to Dan Greenburg, author of "60 Years," the first of three histories written about the Wyoming Stock Growers' Association. Lightly chipped along fore-edges of the original endpapers with all interior pages fine, clean and tight. A choice item.

How To Carve Leather, Featuring The Abc's Of …
by Al Stohlman