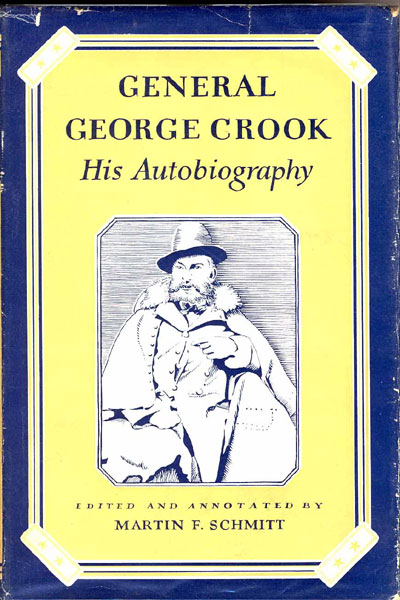 Other works by SCHMITT, MARTIN F. .

First edition. 8vo. Cloth, xviii, 326 pp., map on endpapers, frontis., [portrait], preface, illustrated from historic photographs, 4 maps, bibliography, index. With the exception of The Civil War years, Crook spent his entire military career on the Western Frontier. He was actively involved in the Rogue River and Yakima wars in the 1850's, the Paiute wars in the late 1860's, the Apache campaigns and Sioux/Cheyenne wars of the 1870's, and the Apache wars again in the 1880's. He retired as commanding general of the Department of the Missouri, the largest and most active of all frontier commands. Prior to the presentation of Crook's papers to the War College in 1939, the existence of his autobiography was unknown. His autobiography covers the period from his graduation from West Point in 1852 to June 18, 1876, the day after the famous Battle of the Rosebud. The editor supplements Crook's account with much new material on the remainder of Crook's career from his diaries and letters, as well as contemporary newspaper accounts. An outstanding work and a scarce University of Oklahoma Press title. Former owner's name on half-title sheet, else near fine, tight copy in moderately rubbed dust jacket with light wear to the spine ends and the extremities.

Boots And Shoes Of The Frontier Soldier, 1865-1893.
SIDNEY B. BRINCKERHOFF

Southern And Western Texas Guide For 1878.
JAMES L. AND W. I. SMITH ROCK

Military Headgear In The Southwest 1846-1890.
SIDNEY B. BRINCKERHOFF