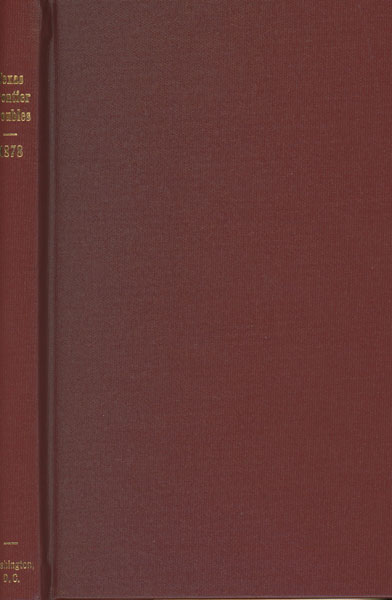 by Brigadier-General E. O. C. And Others Ord

First edition. 8vo. Report housed in a cloth binder with titles stamped in gilt on the spine, 173 [2] pp. Original source of this document is the 45th Congress, 2d Session, House of Representatives, Report and Accompanying Documents of the Committee on Foreign Relations of the United States with Mexico. Testimony of military and citizens regarding trouble with Mexico including rustling. Includes statement of Brig-General E. O. C. Ord, Thomas L. Kane of Pennsylvania, Lt. Col Shafter of the 24th Infantry, including affidavits and letters presented by Lt. Col. Shafter; Examination of Lt. John L. Bullis of the 24th Infantry; William Schuchardt, U. S. commercial agent at Piedras Negras, Mexico; an additional statement of William Schuchardt; testimony of William Steele, adjutant general of the State of Texas; John B. Jones of the Texas State Troops; John S. Ford of Brownsville, Texas; an extract from testimony of Captain McNally; plus reports from many other officials regarding the many problems that have been occurring between Mexico and the United States. Fine copy.

Down The Avenue Of Ninety Years. Reminiscences Of …
by Martha Campbell Vivian