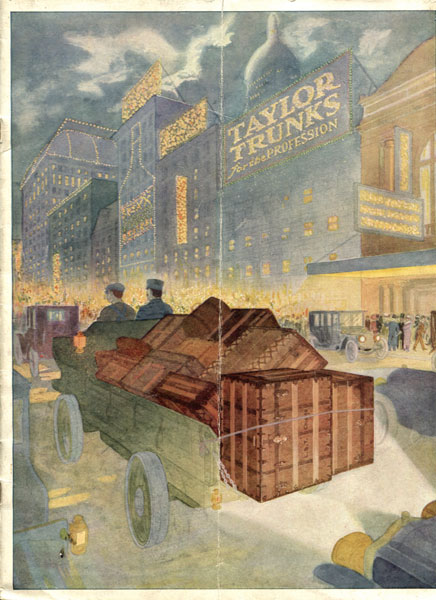 Taylor Trunks For The Profession

11-3/4" x 9" colorful front pictorial wrapper showing an active city scene along with two men driving a truck loaded down with Taylor Trunks. 28pp. to include wrappers. A brief description of this catalog by the President, L.B. Taylor of C.A. Taylor Trunk Works, Inc. C.A. Taylor Trunk Works were makers of very well made high-end trunks and also held patents on many types of trunk parts that were used by several companies. Nicely illustrated pages with detailed trunk descriptions, sizes and prices. Illustrations and details of several additional items such as trays that are used in the XX Professional Trunks, hat rims, padded hat protector, Taylor's XX Steamer Trunks, Regulation Circus Trunks, Gentlemen's, Wardrobe, Make-up Boxes, Musical Instrument Trunks, Money Belts, Ladies' Bags, et. al. The C. A. Taylor Trunk Works was founded by Charles A. Taylor in 1859 and destroyed in the great fire of 1871. He resumed temporarily at one of his stores and later started a permanent factory. In 1873, he opened his third store. The title of C. A. Taylor Trunk Works was adopted in 1872, but the business was not incorporated until 1891. Mr. Taylor died August 3 of the following year. When his wife died in 1902, the Taylor business was passed to her son, L. B. Taylor. The Taylor business was originally a wholesale and retail maker, however, Mr. Taylor drifted into special fields including the theatrical. Mr. Taylor introduced and patented numerous improvements in trunks, but his claim to fame is the trunk bolt which bears his name. In 1878 appeared the bolt known as the “Taylor,” which was made in five styles and designated by numbers from one to five. These were introduced to the trade, but it was not until 1884 that they became popular. In that year Mr. Taylor sold out his hardware business to J. H. Sessions of Bristol, Conn. and included in the sale were the bolt patents and other inventions. Vertical crease to entire pamphlet but doesn't take away from spectacular front wrapper or any of the illustrations. Light soiling to wrappers and a 1/4" closed tear to bottom of rear wrapper else a very nice copy.

Letter From The Secretary Of The Interior, Transmitting, …
by Rev. Sheldon Jackson

Illustrated History Of Oklahoma, Its Occupation By Spain …
by Marion Tuttle. Rock

Journey. Being An Historical Adventure Through The Lands …
by Eileen Buryn