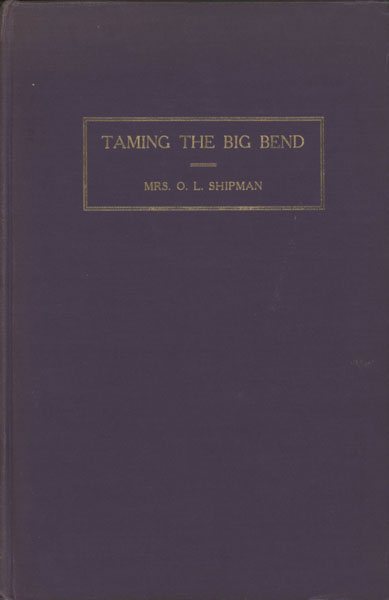 Taming The Big Bend. A History Of The Extreme Western Portion Of Texas From Fort Clark To El Paso.

First edition. 8vo. This copy is inscribed in ink on the front free fly leaf by Texas Ranger, marshal and author James B. Gillett to his friend. Attached to the front pastedown sheet is a newspaper article from the 1930 El Paso Times newspaper, "Ex-Town Marshal Blames Trouble on Saloons." The article is an interview with Gillett about the major cause of gun fights. Attached to the rear endpapers is the Witchita and Presidio train schedule and a map of the routes. Purple cloth, gold stamping on front cover and spine, viii, 215 pp., frontis. [photograph of the author's father], preface, illustrated, plates, portraits, folding map bound-in at rear of book, index. BTB 184 says, "This worthwhile account of the Big Bend region during the 19th century is especially valuable because one of Shipman's major sources was her pioneer father, of whom she writes: 'To my father, Captain Pat Dolan, I am especially indebted. He has lived on the Texas frontier for seventy-five years and with remarkable clearness of mind recalls the stirring events of the days gone by.' She also quotes extensively from other pioneers and transients in the region, such as John L. Bullis, commander of Indian Scouts under Mackenzie; A. J. Fairmore and P. Bougad on the El Paso Salt War; Mexican outlaw Victor Ochoa; and Texas Ranger T. T. Cook. The work contains chapters on the early mail routes, the boundary commission, the camel experiment and transportation, the military posts, freighting, civil affairs, Indian Campaigns, the El Paso Salt War, Texas Ranger campaigns, ranching, outlaws, mining, and Mexican revolutionary activities after the turn of the century. This is followed by a section of sketches of early pioneer and ranching families." Six Guns 2006 says, "Scarce." "In a chapter entitled 'Law West of the Pecos' the author deals with the Texas Rangers and lawlessness. In another chapter there is mention of the Lincoln County War, Billy the Kid, John Wesley Hardin, John Selman, and other gunmen of the Southwest." An attractive bright and square copy in fine condition. A fine account of the early Anglo settlement of the Big Bend region and especially so with the Gillett commentary.

Dr. Goodfellow. Physician To The Gunfighters, Scholar, And …
by Don Chaput

Here Is The Truth About Oklahoma. (Caption Title)
by Hilles & Finney Hardware Co.