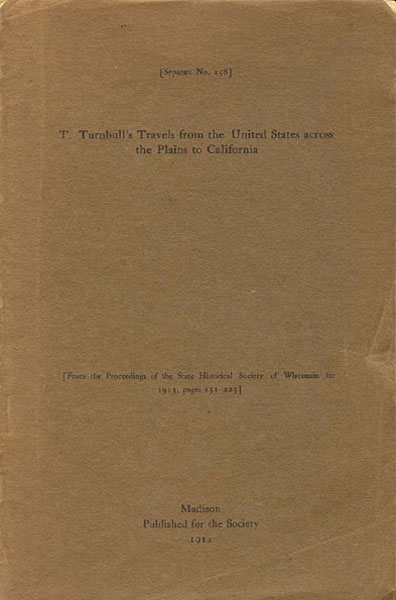 T. Turnbull's Travels From The United States Across The Plains To California

[Separate No. 158]. [From the Proceedings of the State Historical Society of Wisconsin for 1913, pages 151-225]. Edited with introduction and notes by Frederic L. Paxson, and with typographic arrangement by Reuben G. Thwaites. This copy is signed by Paxson, the Pulitzer Prize winning American historian. 22 3/4 cm. in brown printed wrappers. 75 pp., 7 route maps. Thomas Turnbull's journey west of the Missouri was by the Mormon Trail rather than by the Oregon Trail, which was usually followed in 1852 by gold-seekers, and his journal is one of the few records of travel by that route. Dan Elbert Clark says in The American Historical Review, Volume XX, 1915, "Turnbull’s journey was made in 1852 and his route lay from Chicago across Illinois and Iowa to Council Bluffs, thence up the Platte River to Fort Laramie, along the Sweetwater River through the South Pass, and down the Humboldt River to the gold diggings in California. The journal records the incidents, the hardships, and the scenery of the trip in considerable detail, and reflects the spirit of the emigration to the gold fields which even in 1852 was so strong that at times the line of teams stretched out over the plains as far as the eye could see. Furthermore, the journal records the experiences - the disappointments, the hopes, the sickness, and the varying fortune - of one who reached California after the best claims had been taken, when the country was 'all dug up' and prices were abnormally high.'" Kurutz 640 says, "Turnbull left Chicago, Illinois, on April 16, 1852, traveled by way of the California Trail, and reached 'Squaw Hollow,' near Hangtown, on August 18. His next entry reads: 'went to seek my fortune but found every Creek & Kanyon, covered with men & Hundreds going round looking for work. I thought the country somewhat different to what they represented it to be.' Turnbull, in the remaining portion of his diary, described his mining experiences, illness, trip to Benicia and Sacramento, and return to prospecting at Newcastle, Secret Diggings, and Spanish Ravine. Appended to this vivid diary is a letter from Secret Diggings dated March 29, 1853, in which Turnbull detailed his mining experiences and complained that the mines had been worked out. Turnbull’s original journal is in the library of the State Historical Society of Wisconsin. Frederick L. Paxson edited and introduced the manuscript for this publication." Eberstadt 105:302a says, "An exact transcript (never before put into type) of the extraordinarily interesting diary kept by Turnbull during his trip across the plains from Chicago to Hangtown, in 1852, and during his troubles and experiences at the mines after his arrival at the diggings. His route was unusual. After leaving Kanesville, he took the Mormon Trail on the north side of the Platte. From a point opposite Fort Laramie to the Red Buttes, near which the Oregon Trail cut across from the Platte to the Sweetwater, Turnbull's description of his route and the country traversed in almost unique." Wrappers lightly worn at edges and with light wear to spine ends, else a very good copy.

The World Of Doc Holliday, History And Historic …
by Victoria Wilcox