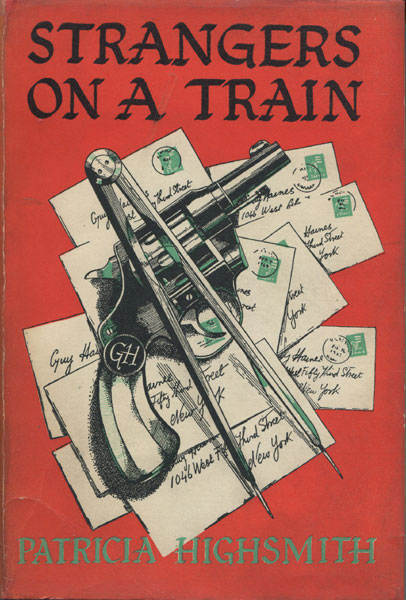 Strangers On A Train.

First U. K. edition of her first and best known novel brilliantly filmed by Alfred Hitchcock, from a screenplay written in large part by Raymond Chandler. Publisher's File Copy with slip affixed to front fly leaf. Near fine in dust jacket with some light professional restoration to the spine ends and corners. In her first novel, Highsmith revels in eliciting the unsettling psychological forces that lurk beneath the surface of everyday life. Two men meet quite casually on the Washington-to-New York train, Guy Haines, a tennis star, and Bruno Anthony, who makes an offer to exchange murders. Bruno Anthony, will kill Guy Haines' estranged wife if Guy will kill Bruno's hated father. Guy doesn't take Bruno seriously until his wife, Miriam, is found murdered in an amusement park. Guy becomes the chief suspect, which threatens his tennis career; his romantic involvement with a U.S. senator's daughter, Anne Morton; his hopes for a political career; and even his life. When Bruno realizes that Guy isn't going to kill his father, he tells Guy that he intends to establish Guy's guilt by planting his monogrammed cigarette lighter at the scene of Miriam's murder. With Anne's help, Guy attempts to stop Bruno after rushing through an important tennis match and racing to the amusement park. Filmed in 1951 and directed by Alfred Hitchcock, the movie starred Farley Granger as Guy Haines, Robert Walker as Bruno Anthony, Ruth Roman as Anne Morton, Kasey Rogers as Miriam Haines, and many others. An exceptional copy of a difficult title.

Kemp: The Road To Crecy.
by Daniel. Hall

The Fallen Sparrow.
by Dorothy B. Hughes