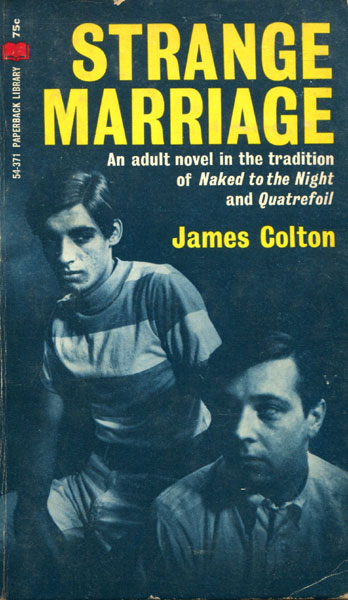 First paperback edition. Signed as by James Colton and Joseph Hansen. PBO. Paperback Library 54-371. First mass-market edition of this pseudonymous second novel, one year after Lost On Twilight Road, and four years prior to the first of his Dave Brandsetter crime novels, Fadeout. Strange Marriage was first published in a very small quantity by Argyle House in 1965. The front panel bears a blue photo of two casually dressed young men sizing each other up and the promotional blurb, " An adult novel in the tradition of Naked To The Night and Quatrefoil," two well-regarded novels with gay themes. A few tiny nicks to the edges and a small corner crease on the back panel, else very good copy of this apparently unread copy. Meet Randy Hale, outwardly a long-time member of the homosexual world. When his beloved Corky leaves him for the exciting gay life in a big city, Randy begins his frantic search for a male lover replacement. Then Randy's entire life is transformed by the new shape of passion he finds in the arms of vivacious, dominating Ruth Landers. Immediately, Randy is intoxicated with Ruth and shortly after meeting, they are married. So desperate is Randy to prove that he can lead a "normal" life, he forces himself to ignore the facts that Ruth is eight years older than he is, a woman vitally concerned with forging ahead in her own career, and most of all, that she is utterly unaware of his active homosexual past. The return of Corky signals the beginning of the most severe test in Randy's life. His relationship with his wife becomes in every way, a Strange Marriage.

The Man With The Crimson Box.
by Harry Stephen. Keeler

Jose Chavez Y Chavez, The Outlaw Who Died …
by Daniel B. Flores

The Long Good-Bye.
by Raymond. Chandler