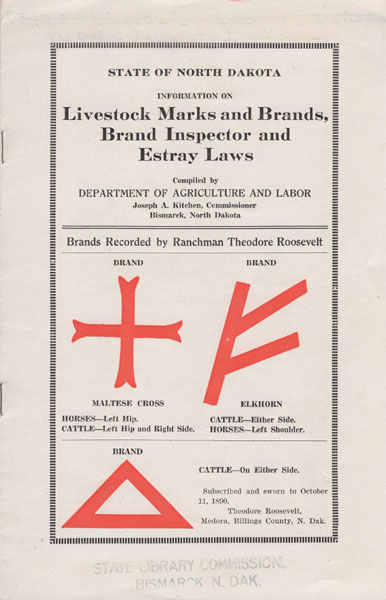 State Of North Dakota. Information On Livestock Marks And Brands, Brand Inspector And Estray Laws. Compiled By Department Of Agriculture And Labor

Other works by NORTH DAKOTA DEPARTMENT OF AGRICULTURE

First edition. 8vo. Pictorial wrappers, n. p. (12 pp. including covers). On the front cover are the brands used by Theodore Roosevelt during his ranching ventures in North Dakota."In 1882 Theodore Roosevelt came to Medora, Dakota Territory, a cow town on the main line of the newly built N. P. Railway, and established himself as a rancher along the Little Missouri River there. His ranches were the Maltese Cross and the Elkhorn, the brands being symbols of these names. Roosevelt also used the Triangle brand. The earliest brands of record in the office of Commissioner of Agriculture and Labor at Bismark showing brands used by Roosevelt were filed October 11, 1890, soon after North Dakota was admitted as a state; facsimiles of these brands are shown on the front cover." Included in the booklet are laws for marks and brands, the shipment of branded animals, and estray laws for North Dakota.. Stamp of the State Library Commission at the lower margin of the front cover, some faint residue from an erasure at the top of the front cover, else a near fine, bright, clean copy of an elusive ranching item.