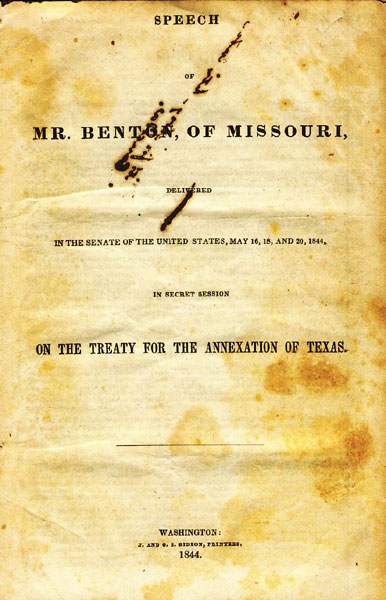 Speech Of Mr. Benton, Of Missouri, Delivered In The Senate Of The United States, May 16, 18, And 20, 1844, In Secret Session On The Treaty For The Annexation Of Texas.

Other works by THOMAS HART BENTON

First edition. 22 cm. Printed wrappers, 28 pp. Benton offers reasoning for annexing Texas into the nation based upon three resolutions that he'd previously submitted but discussion of the resolutions had been postponed. The resolutions are: "That the ratification of the treaty for the annexation of Texas to the United States would be an adoption of the Texian war with Mexico by the United States, and would devolve its conduct and conclusion upon the said United States; That the treaty-making power does not extend to the power of making war, and that the President and Senate have no right to make war, either by declaration or adoption; That the country dismembered from the United States by the treaty of 1819 with Spain, comprehending Texas and a large territory between the Red river and the Arkansas, and being geographically appurtenant to the United States, and essential to their political, commercial, and social system, ought to be reunited to the American Union as soon as it can be done with the consent of a majority of the people of the United States and of Texas, and when Mexico shall either consent to the same or acknowledge the independence of Texas, or cease to prosecute the war against her (the armistice having expired) on a scale commensurate to the conquest of the country." Benton considered the discussion of the 3 resolutions as the most appropriate mode of discussing the treaty. Concluding his speech, Benton offers, "I want Texas; not the Texas of new dimensions, stretching from the head spring to the mouth of the Rio Grande, but the Texas of La Salle and of Jackson, with all the dismembered country between the Red River and the Arkansas. I want this Texas and this region, and mean to get it when I can without dishonor or unjust war." First page disconnected. Soiling throughout, along with ink in margins of several pages, but not effecting text. Two closed tears to p. 8-9 and with chip to top corner edge of p. 9-10, impacting 7-8 letters on 5 lines of text. Fragile.

My Experience With Indians
JOHN JAMES