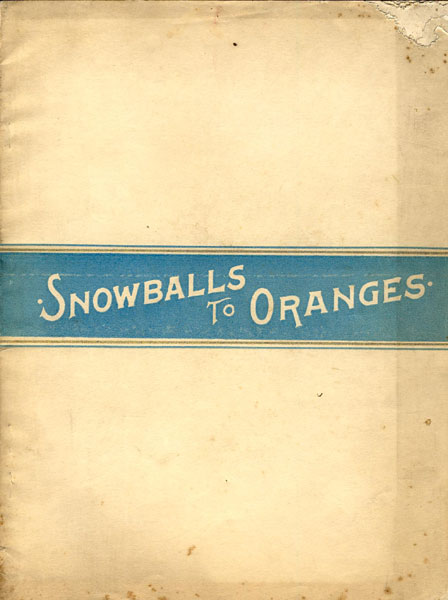 Snowballs To Oranges From The Icy North To The Land Of Flowers. New York To Florida Over The New Florida Short Line Composed Of The Pennsylvania Railroad, Southern Railway And Fla. Central & Peninsular R.R.

10-1/2" x 7-3/4" printed wrappers. 81pp. plus 16 pages of advertisements. Many illustrations printed on both sides with captions below. Chapterheads. Advertisements. Two maps. First map is entitled "Map of the Florida Central and Peninsular R.R. and Connections" with railway lines beginning in New York and Chicago travelling to different locations in Florida. Second map is entitled "Map of the Jacksonville, St. Augustine and Indian River Railway" with railway line beginning in Jacksonville travelling south to many locations in southern Florida. This is a novel. The story begins with Reginald Ware dying and leaving two million dollars to Amos Wainwright. Ware's nephew has been left a note with specific instructions as to what he is to do with the money including permission to use as much as necessary to find Wainwright. The only "clew" given was the fact that his uncle had heard ten to twelve years ago that Wainwright had moved to Florida. Ware's nephew travels in luxury, following the "clews" to Tampa where he finally finds Amos Wainwright. Fascinating descriptions of many cities along the way such as Asheville, N.C., Columbia and Charleston, S.C., Augusta and Savannah, GA., Fernandina, Jacksonville, Tallahassee, Cedar Keys, Ocala, and Tampa, FL. Soiling to wrappers, nibbling to top fore-corner of front wrapper plus next 2 pages that gradually lessen through page 19, "Southern Railway and Fla. Central & Peninsular R.R.," on rear wrapper along with an illegible name written in ink. Light wear to the extremities including wear to spine ends, agent's stamp to bottom of title page.

"Seeing Denver"
by The American Sight-Seeing Car And Coach Company