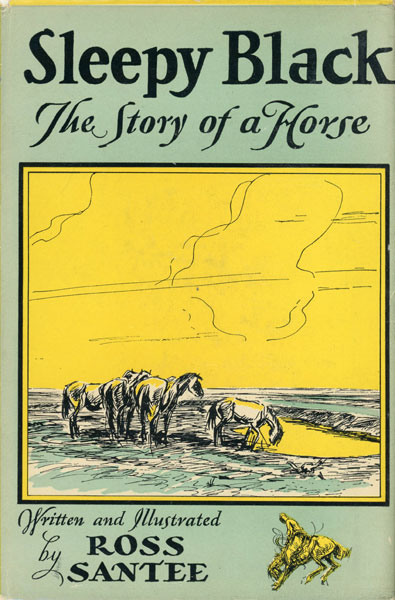 Sleepy Black. The Story Of A Horse.

First edition. 8vo. Cloth, titles stamped in black on the front cover and spine, black pictorials on yellow front & rear endpapers. [4], 250 pp., yellow top edges, illustrated. by the author. "Ross Santee was an author and artist noted for his depictions of the Southwest. He was born in Thornburg, Iowa, in 1889. He had an interest in art throughout his childhood and after graduating from high school he attended the Chicago Art Institute from 1907-1912. After he left the Art Institute he spent an unsuccessful year in New York City trying to get his artwork published. After year of rejection notices, he burned his art supplies and moved to Arizona to live with his mother and sister. While in Arizona he found work on a ranch wrangling horses. Despite his experiences in New York, Ross resumed sketching while working on the ranch. In 1920, with the encouragement of friends and local publishers, Ross returned to New York City. This time the publishers were not only interested in his drawings but were also interested in his experiences as a cowboy. They convinced him to pen short stories based on his time on the ranch. Over the next five decades he wrote thirteen books, dozens of short stories and made thousands of sketches." Critics classify his work as in line with literary realism. This story is told by a horse from his time as a colt on the range, to become a ranch horse, he joins a rodeo, kills a man while there, is sold to a band of outlaws, and finally a victim in the bull ring -- the fate of many an older horse --- from which rescue and the promise of peace come just in time. A fine, bright, square copy in a price-clipped, bright dust jacket with light wear to the spine ends. An exceptional copy.