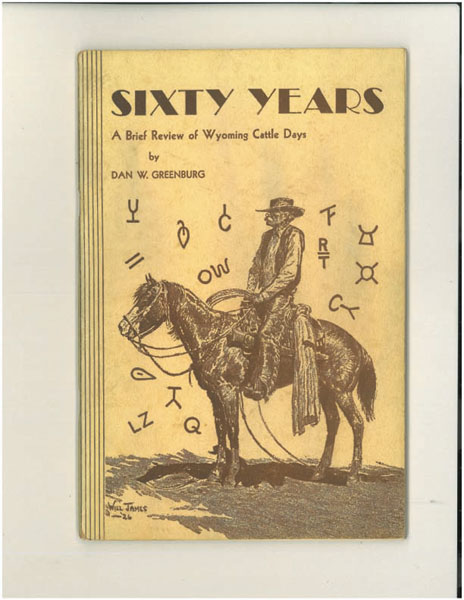 Sixty Years. A Brief Review. The Cattle Industry In Wyoming, Its Organization And Present Status And Data Concerning The Wyoming Stock Growers Association.

First edition. 8vo. Decorated wrappers, 73 pp., foreword, preface, illustrated, plates, portraits, tables. Front cover illustration by Will James. Herd 923 says, "This is the first of three histories written about the Wyoming Stock Growers' Association. Others have followed every ten years." An important cattle item that gives the history of the Wyoming Stock Growers' Association, the early cattlemen and early settlers of Wyoming, the names of the officers and members of the executive committee of the Association, and the names of the round up foremen. A scarce cattle title. This copy contains a full-page penciled inscription as follows, "To our old friend, Mac Radcliff. An old time "Cow Boy" who lived at a time when we were not fenced in and had the pleasure of living at a time where men were men among men. Possibly this will recall many pleasant memories. With many pleasant memories, Mac. Very Truly, Joe Williams." Mac Radcliff was a Nebraska rancher on Cedar Creek for many years. Joe Williams died from an apparent heart attack at his ranch home west of Douglas on Monday, August 27, 1973. He was 81 years of age. He came west as a young man and worked for Warren Livestock Company of Cheyenne and broke horses for the U. S. Cavalry. He also freighted with four and six teams of horses. Later he joined Tex Austin professional rodeo and went to England where he performed before King Edward VI. When he returned to the United States during World War I, he joined the army and was stationed in Texas, serving along the U. S. - Mexican border. Joe served as a train guard for the Union Pacific Railroad from Sidney, Nebraska to Green River, Wyoming, and assisted during the search for Bill Carlisle, famed train robber. An accomplished log builder, Joe built and helped establish the beautiful H-Bar-V guest ranch in the mountains southwest of Douglas. In the mid-1960's he purchased a cattle ranch west of Douglas which he operated with the assistance of Myrtle Miles until his death.

The Silver Short Line. A History Of The …
TED AND HARRE W. DEMORO WURM