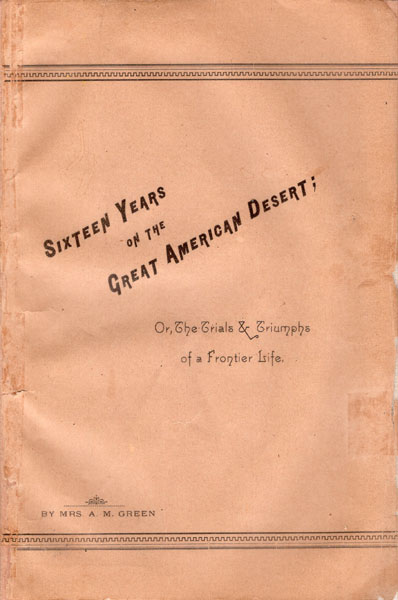 Sixteen Years On The Great American Desert Or, The Trials And Triumphs Of A Frontier Life

First edition. 8vo. Original tan wrappers, with titles printed in brown on the front cover, 84 pp., preface, errata. "The Union Colony of Colorado (also known as Greeley, Colorado) was organized as a colony in late 1869 by Nathan Meeker and Horace Greeley as an irrigated farming settlement. Nathan Meeker worked for The New York Tribune at the time as the paper's agricultural editor and posted an ad for the establishment of a new colony in the Territory of Colorado. He used Greeley as an offer to start over and build a new life among 'a middle-class community and sought settlers who abstained from alcohol, were literate, and possessed 'high moral standards. In April 1870, 144 families traveled westward on the railroad to settle in 'Union Colony.' The settler families began building irrigation ditches and creating farming colonies. 'Union Colony' attracted hard-working, temperate, family oriented people. The colony survived and prospered because it placed emphasis on working together for the benefit of all, particularly by supporting public education and culture, but still allowed for exceptionally hard working and innovative people to become prosperous in their own right." Annie Maria V. Green and her husband William "Will" M. Green were one of the pioneering couples. The author tells of leaving her home in Franklin, Pennsylvania, in 1870 to travel with her husband and two children to move to Greeley, Colorado, as part of a small group known as the "Union Colony." She tells of the settlement of Greeley, life in Greeley, her home there, and their ranch outside the town, visitors from Pennsylvania, her attempts to earn money by baking bread, washing clothes, ironing, etc. She also tells of hardships which include her husband leaving her alone with the children for weeks at a time while he went with others to mine for coal; floods, tornadoes, and of a plague of locusts that damaged their crops and laid their eggs in the soil in order to hatch at a later time and damage crops again. Clearly Mrs. Green loved her family and her home in Pennsylvania and she accommodated hardships in order to comply with her husband's desire to have a home in the far west. Much information on Colorado, especially the Greeley and Fort Collins areas. Minor wear to the fore-edges else a very good, tight copy housed in a cloth clamshell case with a leather spine label and titles stamped in gilt.

From Yorktown To Santiago, With The Sixth U.S. …
by Lieutenant-Colonel W.H. Carter