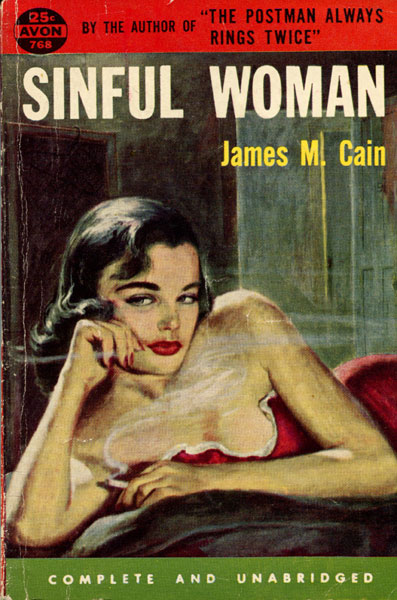 Fourth edition of the paperback original, as rack-size Avon 768. The printing history on the copyright page of this edition treats all four Avon editions, and the second printing of the second edition, as successive printings of the same edition, though each of the editions has a different publisher's number and different cover art. As a result, this fourth edition copy is identified as the "Fifth Printing..... March, 1957." Using the printing dates in this copy, it is possible to reconstruct the correct early publishing history of SINFUL WOMAN, as follows: Avon Monthly Novel #1. First edition, in digest-size wraps.....................Oct 1947 Avon 174. Second edition (first rack-size), with new cover art.......................Sep 1948 Avon 174. Second printing, same cover......Mar 1949 Avon 599. Third edition (rack-size), with new cover art.......................July 1954 Avon 768. Fourth edition (rack-size), with new cover art.......................March 1957 In anticipation of this fourth edition, Cain signed a new contract with Avon on 29 June 1956, giving Avon exclusive rights for three more years to publish and sell paperbound editions of Sinful Woman for no more than 25 cents a copy. The next such edition had to be published within one year of the new agreement, which provided for Cain to receive a $500 advance on signing and another $500 on publication of the next edition. As Cain's biographer Roy Hoopes tells it, Cain was desperate for money at this point in his career, and the $1000 advance from Avon (on a title that they had already been selling for almost ten years) must have seemed a great windfall. One of the two (or perhaps three?) master copies of this contract, signed in ink by Cain, by Avon's executive v.p. Joseph Mann, and by someone from Cain's literary agents, Harold Ober Associates, is included with our VG+ copy of Avon 768, whose publication in March of '57 met the contract's one-year deadline with a couple of months to spare. The document, in fine condition, is on a 5pp standard Avon contract form, with particulars as to the selling price, royalty amounts, first publication date, advance payments etc entered on a manual typewriter with a black ribbon and initialed in ink by Cain and Mann (six times each). Given that the publishers seem to have viewed Avon 768 as the fifth printing of a title they had been selling for almost ten years, this new contract, providing for advances equal to those that Cain had received when the manuscript was first delivered to Avon in 1947, should be of interest both to Cain collectors and to vintage-paperback aficionados. With the related fourth-edition copy of Sinful Woman. Sylvia is in Reno, waiting for her divorce from Baron Victor "Vicki" Adlerkreutz to be finalized. By ending her marriage to Vicki, she'll also finally free herself from a film contract with Vicki's buddy, second-rate film director Dmitri Spiro. Her plans are falling into place, and then Sylvia learns that Vicki plans to remarry immediately .... marry a woman who would undo the plan Sylvia has worked years to put into place! Shortly thereafter, Vicki is dead and Sylvia is trying to protect someone.

The Man Who Heard Too Much
by Bill Granger