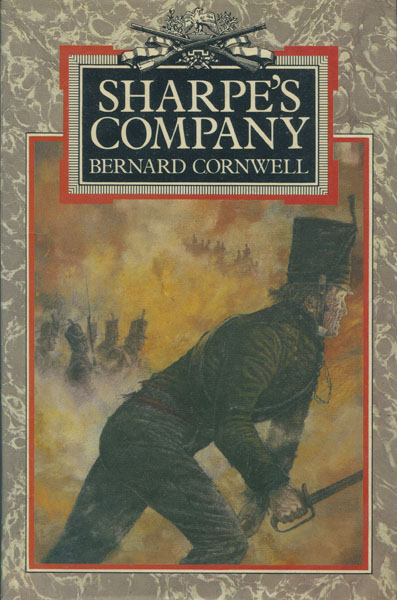 Sharpe's Company. Richard Sharpe And The Siege Of Badajoz January To April 1812

Other works by BERNARD CORNWELL

First edition. Inscribed on the front fly leaf to the couple who allegedly encouraged Cornwell to write the Sharpe series of adventures. Also signed by the author on the title page. Third book in the series. Fine in fine dust jacket. Dust jacket cover art by Tony Kerins. One of the more elusive Sharpe titles. Early 1812: Wellington led his army to the fortress of Ciudad Rodrigo, the French-held bastion on the northern road into Spain. The Allied troops stormed the city, but for Captain Richard Sharpe of the South Essex Light Company, their victory was soured by the loss of Colonel Lawford, his friend and Commanding Officer. As Wellington moves on Badajoz, a new Colonel arrives from England, and with him comes a new Captain for the Light Company: a man with money to buy the promotion Sharpe must earn on the battlefield. In the besieged city of Badajoz is the woman Sharpe loves, and with her is their daughter, a child that Sharpe has never seen and Wellington has ordered that the city must fall at any cost.

The Man From Yesterday.
GEORGE MARKSTEIN

John Clymer, An Artist's Rendezvous With The Frontier …
WALT REED