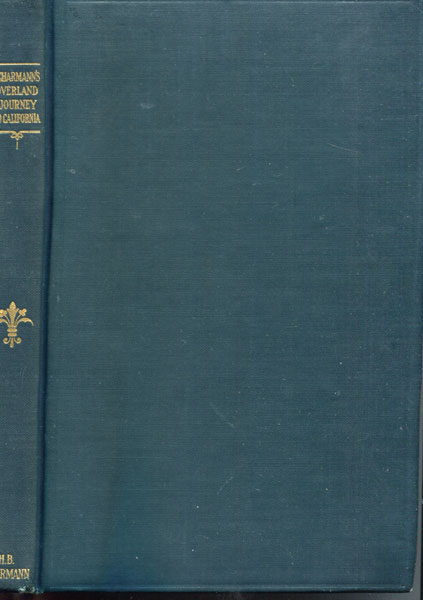 Scharmann's Overland Journey To California. From The Pages Of A Pioneer's Diary

H. B. By Margaret Hoff Zimmermann, A. B. And Erich W. Zimmermann, Ph. D Scharmann [Translated From The German Of]

First English language edition. Originally published in German in 1905. Privately printed in an edition limited to fifty copies. 16mo. 6 3/8" x 4 1/4" original green cloth, titles stamped in gold gilt on the spine, 114 pp., frontispiece, preface, illustrated. Kurutz 559b says "Scharmann started his overland odyssey on March 20, 1849, from New York as the president of a German company. By November 1, the company arrived at Lassen's Ranch, where Scharmann encountered Peter Lassen, who imparted little aid to Scharmann's sick wife and infant daughter. Shortly thereafter, both died. The next portion of the book consists of his experiences looking for gold and the difficulties of trying to survive high prices, hard work, illness, and little success. The German narrates a detailed description of Marysville, Sacramento City, Negro Bar, and various mining methods. Having seen enough, Scharmann left the glorified gold region on October 24, 1850, and returned home by ship." Scharmann offers a brutal picture of the exploitation of emigrant parties and the drudgery of prospecting and towns like Marysville, Sacramento, and San Francisco, 1849-1851. Internally bright and clean, minor rubbing to the spine ends and corners, mild vertical crease to front cover, else a near fine copy.

Why The Raven Calls The Canyon: Off The …
by E. Dan Klepper

The Three Mustangeers
by Will James