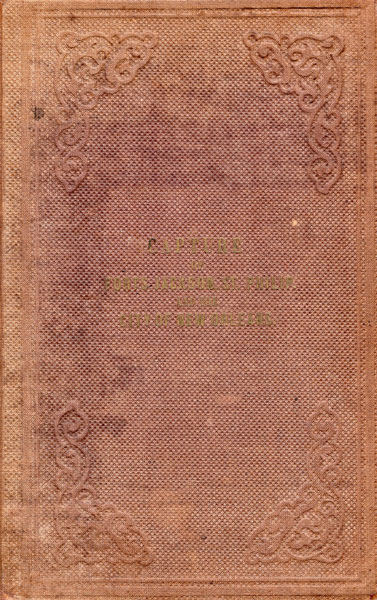 Reports Of The Naval Engagements On The Mississippi River, Resulting In The Capture Of Forts Jackson And St. Philip And The City Of New Orleans, And The Destruction Of The Rebel Naval Flotilla

WELLES, GIDEON [SECRETARY OF THE NAVY]

First edition. 8vo. Original blind stamped pebbled brown cloth, [2], 107 pp., titles stamped in gilt on the front cover, plus two colored frontispiece plates and three folding maps. This copy is inscribed on the verso of the first frontispiece plate, "Presented by Rear Admiral D.G. Farragut [to] Acting Master Chas. J. Gibbs." Gibbs served under Farragut on the steam-sloop, Richmond, and the inscription is almost certainly in Gibbs's own hand, noting his receipt of the book from Farragut. Laid into this copy is a small albumen photograph of Farragut's flagship, The Hartford, with a number of men standing in the foreground. This volume collects a slew of official reports on the highly important Union Navy victories at the mouth of the Mississippi in April, 1862, as Farragut captured key Confederate forts on his way to seizing New Orleans. More than two dozen reports from a variety of naval officers describe the six days of ferocious mortar bombardments and the rebel responses, a display of firepower that historian James McPherson calls "the greatest fireworks display in American history." The operations that resulted in the capture of forts Jackson and St. Philip, and the bombardment and surrender of New Orleans are described in detail. Other reports give casualty figures, discuss the disposition of Confederate captives, and relate coastal surveys. The plates show the Confederate ironclads Louisiana and Manassas partly submerged in water, the latter vessel on fire "as she appeared in passing the 'Harriet Lane' after receiving a broadside from the 'Mississippi.'" The maps include a detailed view of the water and railroad approaches to New Orleans from the south; the Mississippi River below forts Jackson and St. Philip before Farragut's victory; and a plan of Fort Jackson. The well-executed maps and illustrations are all by the Bowen firm of Philadelphia. A volume desirable for its reports of a significant turning point in the Civil War, the photograph of Farragut's flagship laid-in, and the presentation from Farragut to one of his lieutenants. Expertly rebacked in matching cloth with title page and plates repaired along inner margin, and small tears in the maps neatly mended with minor loss by a master paper conservator. Moderate foxing and staining throughout, else a very good copy.

The Unfinished Job. "Stay With It Boys!"
J.C DYKES