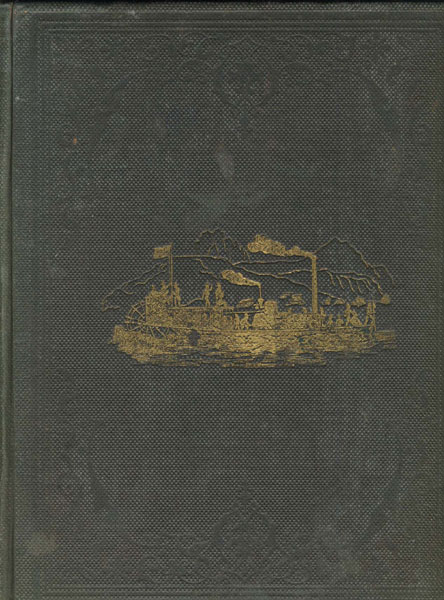 First edition. Five parts in one volume. Quarto. 36th Congress, 1st Session, Senate Ex Document. Original gilt pictorial, blind-stamped dark green cloth, gold stamping on spine. 2 large folding lithographic maps. One map has one, approximately 12" closed tear, professionally repaired. 8 fine folding lithographic views, 8 chromolithographic (beautiful color) plates showing dress of various Indian tribes along river and 16 lithographic plates of views (and fossils) from sketches by Baldwin Mollhausen. Probably best known as the engineer and architect of the Washington Monument, in 1857 Ives was promoted to first lieutenant and was named to lead an expedition up the Colorado River in order to develop potential routes of supply in the event of a war between the national government and the Mormon settlements in Desert (Utah). Ives's expedition included John Strong Newberry as naturalist, the Prussian Heinrich Balduin Möllhausen as artist and unofficial diarist, and F. W. Egloffstein as topographer. Ives purchased a steamboat in Philadelphia. The vessel was taken apart and shipped via the Isthmus of Panama to California and thence to the mouth of the Colorado River, where Ives and the members of his expedition rendezvoused late in 1857. Ives and his men reassembled the steamboat and christened it the Explorer. They launched the ship on 31 December 1857 and set out on their journey of reconnaissance. Ives' report is one of the first descriptions of the Grand Canyon (Big Canon of the Colorado) and of the area's native inhabitants. His expedition predated John Wesley Powell's expedition by a decade. Minimal foxing. Rubbing to corners and to head and toe of spine. Overall tight and clean. Very good.

A Day In The Siskiyous, An Oregon Extravaganza
by J. Franklin Hanly

Quantrill And The Border Wars.
by William Elsey. Connelley

Bravo Of The Brazos. John Larn Of Fort …
by Robert K. Dearment