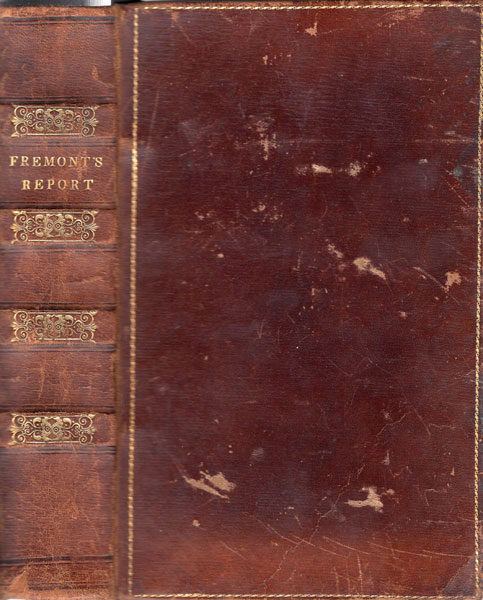 Report Of The Exploring Expedition To The Rocky Mountains In The Year 1842, And To Oregon And North California In The Years 1843-"44.

28th Congress, 2nd Session, Senate Exec. Doc. 174. Serial 461. First Edition, Senate Issue. Bound in full brown leather with decorated raised bands and title in gilt on spine, 693 pp. Illustrated with 22 lithographed plates, 5 maps, 3 folding with large folding map in pocket at rear. On the front preliminary sheet are the lightly penciled words " Presented by Captain Fremont." An outstanding report and Fremont's greatest work. It records Fremont's first two expeditions. "The first expedition consisted of 25 men, with Kit Carson as a guide. They went a little beyond South Pass. The second expedition, consisting of about 40 men, was guided by Thomas Fitzpatrick (joined by Kit Carson en route) and reached the Columbia River and Fort Vancouver. The expedition then looped back to California by a spectacular winter crossing of the Sierra Nevada and returned to St. Louis via the San Joaquin Valley, Tehachapi Pass, and the Great Salt Lake."--The Pacific Northwest. The great Fremont (Preuss) folding large map in nice condition with a few minor splits at folds, else near fine. Of this map Carl Wheat said, "The great folding map is an altogether memorable document in the cartographic history of the west, and for it alone Fremont would deserve to be remembered in history." The report is comprised of a well-written and interesting narrative of each expedition, combined with much detailed scientific data, skillfully-produced maps, and attractive lithographic plates by E. Weber & Co.-Baltimore. This report, as well as the expeditions themselves, received much promotion and exposure from Fremont's father-in-law, Sen. Thomas Hart Benton. The report guided Oregon emigrants and California gold seekers, and firmly established Fremont's reputation.Occasional foxing ranging from light to moderate, else very good A nice, clean, tight copy of this important work, which is usually encountered heavily foxed & worn, and/or without map. The important large folding map is in near fine condition. Leather covers are lightly scuffed and lightly rubbed at the extremities, bottom edge of rear map pocket is torn but still contains the map. Overall a very good copy.

Tombstone: Who, What, When, Where
by Rita Ackerman