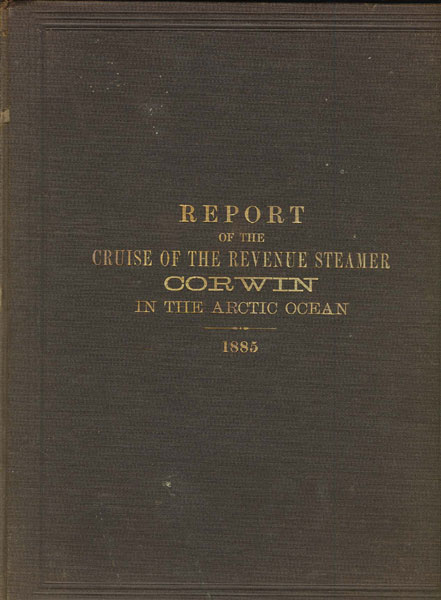 First edition. Quarto. Original brown cloth, titles stamped in gold gilt on the front cover, 102 pp., illustrated, plates, maps. There are two large folding maps, one a map of the Koowak River, and the other a map of the Noatak River and each map is in fine condition. There are four chromolithograph plates (one bird, one plant, two fish) and thirty-eight black & white plates many of an ethnographic nature. Healy (1839-1904) patrolled the 20,000 miles of Alaskan coastline for more than 20 years, earning great respect from the natives and seafarers alike. While at the helm of the CORWIN, he enforced liquor laws, protected seal and whale populations under treaty, delivered supplies and medical assistance to remote native villages and shipwrecked whalers, returned deserters to merchant ships, collected weather data, enforced federal laws, and accomplished exploration work. In addition to Healy's narrative, this volume includes shorter accounts by expedition members who were sent to complete the survey of the Koowak River (J. C. Cantrell) and explore the Noatak River (S. B. McLenegan). C. H. Townsend contributed an article on the natural history and ethnology of northern Alaska. A few tiny nicks to the cloth along spine channel, light wear to the spine ends, corners lightly bumped and worn, else a very good, internally clean copy.

Ghost Riders In The Sky. The Life Of …
by Michael K. Ward

History Of The State Of Delaware. From The …
by Henry C. Conrad