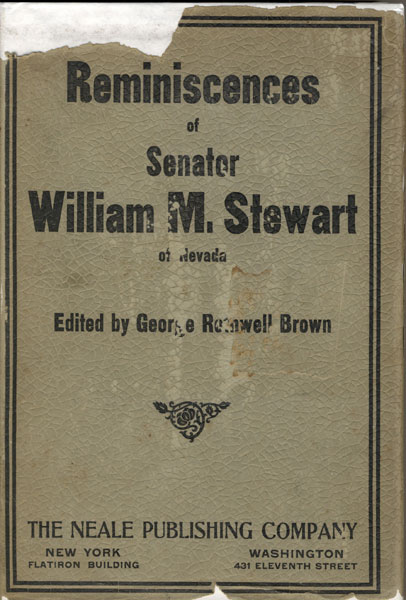 Other works by BROWN, GEORGE ROTHWELL .

First edition. Red cloth, outlined in black, gold stamping on front cover and spine, 358 pp., frontis. [portrait], introduction. Paher 1883 says, "Fresh from Yale, Stewart went to California in '49 where he mined for ore, fought Indians and became a district attorney. After 1861 he pursued his law career in Virginia City, and in Comstock litigation alone he received $500,000.00 in fees. In 1864 he was elected to the U.S. Senate from Nevada; after leaving office in 1876 he looked in on cattle-raising in Arizona and mining in Sonora. In 1887 Stewart was reelected to the Senate, where not suprisingly he devoted much time lobbying for the silver interests. At 83 and in retirement, Stewart reminisced about his experiences while sitting around his southern Nevada law office at Rhyolite. In this book he recounts the great Comstock legal battles involving $10 million and more, and describes how he championed the cause of "one-ledge" litigants. He also wrote important national mining laws. This informal discussion also has general information on contemporary politics and society, railroads, the Mormons, chapters on "Discovery of the Comstock Lode" and Nevada's territorial and early statehood days. Stewart thus touches upon most everything that happened in Nevada and the West. An important work." Six Guns 295 says "Scarce." Senator Stewart says he witnessed the O K Corral battle, from a distance. Cloth lightly rubbed, else very good, tight copy in dust jacket with chip at head of spine and extending onto the front panel, and with moderate wear to the extremities. PAHER 1883. SIX GUNS 295.