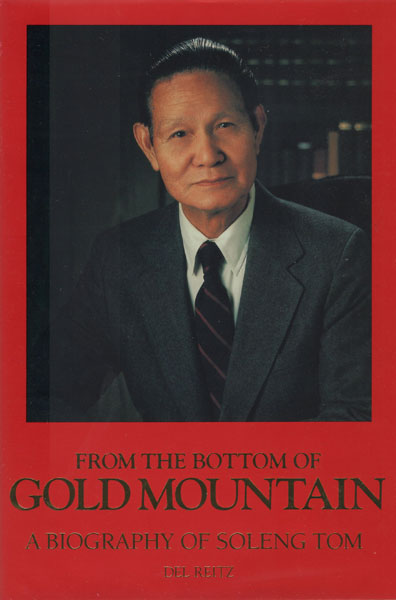 From The Bottom Of Gold Mountain. A Biography Of Soleng Tom

First edition. 8vo. Bright red cloth, titles stamped in gold gilt on the front cover and spine, [8], 129 pp., frontispiece [portrait], illustrated from photographs, portraits. Soleng Tom (1912-2000) was born March 11, 1912, in Canton, China, to a merchant hotel family. He moved to the United States in the late 1920s, working in the San Francisco area unloading produce on the docks and at other jobs. He moved to Tucson in 1928 to join an uncle, who operated a laundry here. He rose to become a leading city businessman, owning many companies including Tom Wing Market and Soleng Supermarket. He served 16 years – 1964-80 – on the Tucson Unified School District board, as president four times and clerk three times. His TUSD philosophy matched his personal philosophy – the "bootstrap" system of working to further oneself. Soleng opened Tucson's first shopping center in south Tucson. During World War II, he was a naval aviator in the US Navy. After the war, he came back to Tucson to continue his business career including real estate, insurance, mining, restaurants and other investments. He was a civic leader in Tucson for many years. As new, unread copy in dust jacket.

The Literature Of The Lewis And Clark Expedition, …
Stephen Dow Beckham [Essays By]

The Last Husband And Other Stories
by William Humphrey

Railroads In Alaska. Letter From The Secretary Of …
by James Rudolph Garfield