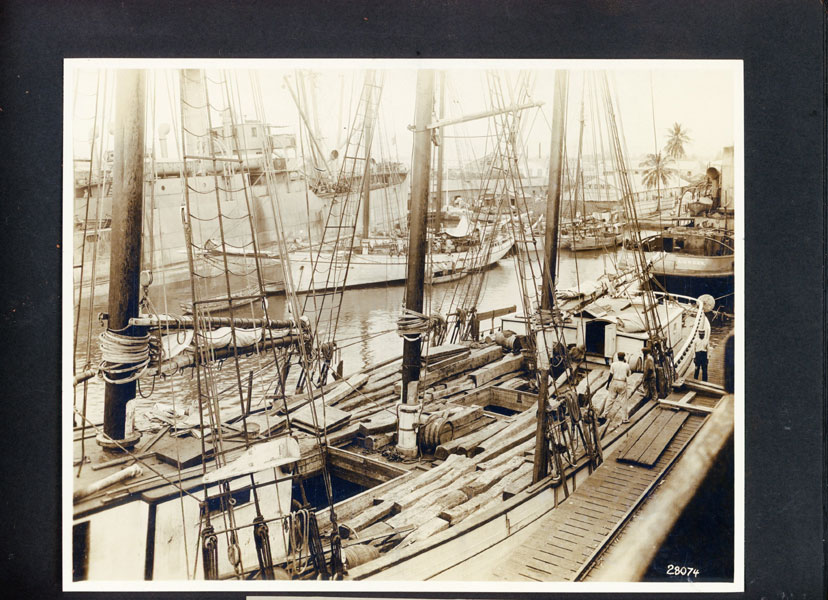 First edition. 10" x 14" x 2 1/2" leather album with the words stamped in gilt on the front cover "American Express Cruise To South America." A photograph album containing 102 excellent large format photos taken during a cruise to South America on the steamship S.S. Ebro in 1922. The photographs measure 7 1/2" x 9 3/4" and are lightly tipped to the black paper pages. Below each photo is a letterpress caption describing the picture shown. The ship traveled from New York to Jamaica, Panama, through the Panama Canal to the coast of South America, including Chile and Peru. The tour group also traveled across the Andes Mountains to Argentina and the city of Buenos Aires. The identified locations and cities include Jamaica, Panama, Peru, Lima, Exposition Grounds in Lima, Mollendo, Arica, Tacna, Coquimbo, Irique, and Antofagasta, Peru, Argentina, Buenos Aires, Chile, Valparaiso, Santiago, Vina Del Mar, Los Andes, Salto del Soldado; Transandine Railroad over the Andes Mountains; Las Cuevas, La Plata, Montevideo; plus views on board the steamship and train. Photographs include native boys swimming out to the ship; numerous street scenes in the various countries with most showing locals; locals traveling via donkey-drawn carts; the group of passengers visiting Jamaica's Castleton Gardens; a native family standing in front of their hut; Christobal; the Gatum locks; passing through the Culebra Cut; the ruins of San Juan Cathedral in the old city of Panama; the Panama-Gatun locks; the harbor in Callao, Peru with wooden lighters; the Plaza di Armas in Lima; the Exposition Grounds in Lima; the Casa Torre-Tagla in Lima; the Inquisition Chamber in the senate building in Lima; the group of travelers standing in front of the train ridden from Arica to Tacna; boatmen with their boats filled with various fruits to sell to travelers; the Auto Club in Antofagasta; the loading of copper bars aboard the ship by locals; the grand stand at the Argentine Jockey Club; the shoreline of Valparaiso; bird's eye view of Valparaiso; the entrance to the Cerro Santa Lucia in Santiago; the President's palace in Santiago; hay that has been baled and is being hauled via ox car; locals working at baling hay; a primitive rope factory with working locals in Los Andes; large earthenware vats for making wine in Los Andes; scenes at various rail stations; the Museum at La Plata; the Montevideo Plaza; along with various important buildings, monuments and points of interest. The album concludes with photos of the boat's passengers engaged in various activities while aboard the ship. The steamship S.S. Ebro was purchased by the Pacific Steam Navigation Company in 1922 and ran the route from New York to Chile until it was sold in 1935. Front cover loose, but holding, scratches and rubbing to the covers, extremities rubbed, else interior solid with all photographs secured and in near fine to fine condition. Overall a very good copy.

It Seems Like Only Yesterday: Mining And Mapping …
by Robert With Robert And Judith Whitcomb Lenon

Early Illinois Railroads. A Paper Read Before The …
by Wm. K Ackerman