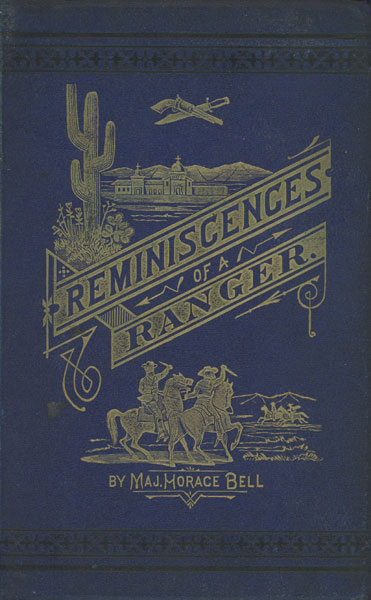 Reminiscences Of A Ranger Or, Early Times In Southern California.

First edition. 8vo. Original pictorial blue cloth, 457 pp., preface, illustrated. Portrays pioneer life as it then existed, not only among the American pioneers, but also the California Spaniards. Major Bell was also a member of Walker's filibustering expedition. Adams 150 #9 says, "This is said to be the first cloth-bound book printed, bound and published in Los Angeles. Its scarcity is largely the result of the fact that the publishers had the only print shop in town, and since this was the biggest job they had undertaken, they did not have sufficient type for the complete book. So, after printing the first half, they took the type down and reset it for the second half. The result was a small edition." All editions have much information on the lawlessness of early California. Cowan page 44 says, "Bell has written more minutely upon the "seamy side" of society than any other California author, and there is a fascination about his book." Very good, tight copy with some light cosmetic touch-up to the spine ends and corners. Attractive copy.

Trains Of The Old West
by Brian Solomon

The Lady Of The Rose. The Story Of …
by Dorothy. Devere

The Early History Of Motley County
by Harry H Campbell