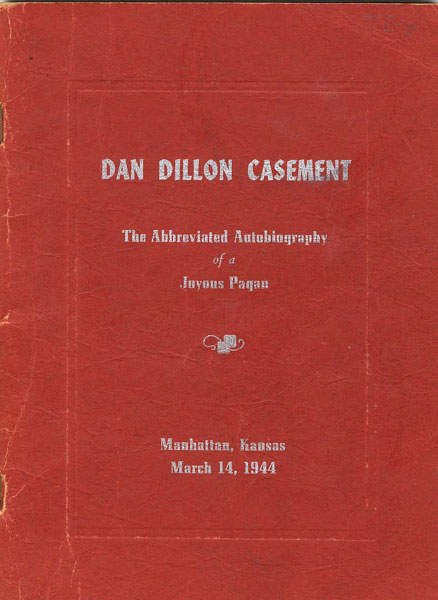 The Abbreviated Autobiography Of A Joyous Pagan.

First edition. Original red wrappers, cover title, [5], 74 pp., frontis. (portrait of Dan W. Casement), illustrated, plates, portraits. Inscribed by Casement on the half title page to a family friend. This copy from the library of Clint and Dot Josey and with their inked signature on the front inside cover and their penciled notation at the top of last page. Also the penciled notation of collector Larry Myers on the last page below the Josey notation. Laid-in to this copy is a newspaper article dated June 10, 1952 advising of Casement's recognition by the Kiwanis Club, a copy of the guest editorial, and a newspaper clipping advising of Casement's death on March 7, 1953. Also laid-in is a 1952 Christmas card that pictures Dan Casement. In 1911, Casement purchased his first "Steeldust" horse, buying Concho Colonel sight unseen from William Anson of Christoval, Texas, and brought it back to his ranch in Kansas. Casement liked the stallion so much he bought Concho Colonel’s best son, Balleymooney. This started a passion in Casement for the breed. During the first meeting of the American Quarter Horse Association held in 1941, Casement proposed a resolution concerning conformation and his resolution was adopted, stating that a stallion needed bulldog-type conformation to be registered in the studbook. He thought speed and cow sense were essential qualities to the breed. HERD 427 says, "Rare." "The story of a successful cattleman." Lightly rubbed along spine and to the covers, else a very good copy housed in the original four-point cloth case with titles stamped in silver gilt on the spine.

Amphibians And Reptiles Of The Us-Mexico Border States. …
Julio A. Lemos-Espinal [Edited By]