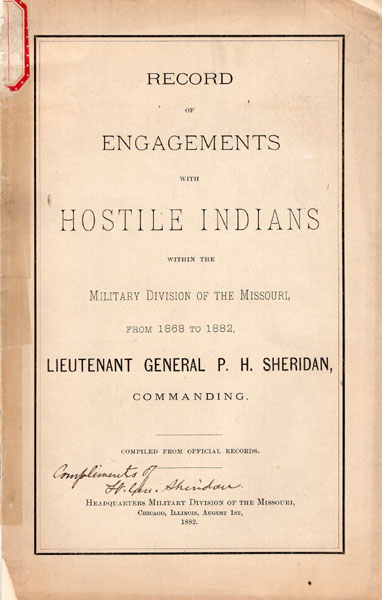 Record Of Engagements With Hostile Indians Within The Military Division Of The Missouri, From 1868 To 1882

First edition. 8vo. Signed in ink at the bottom of the front cover, "Compliments of Lt. Gen Sheridan." Original printed wrappers, 120 pp. A great and important record of military engagements with various tribes during the peak period of the conflicts in the central and northern plains. "Over 400 engagements are listed and described."--Graff 3753. This was reprinted in Washington in the same year with 112 pages, The Chicago printing is considered to be rare, Contains details on Beecher Island, Washita, Fort Robinson, Apaches, Comanches, the Yellowstone Expedition, much on the Little Big Horn and Custer, and much more. Rittenhouse 520 (The Santa Fe Trail) says: "Contains descriptions of about four hundred engagements, arranged by years and briefly described." "Many of the incidents occurred along the Santa Fe Trail." O'Keefe 2207 is mistaken in his description of the printings. He notes that a Chicago and Washington printing was done in the same year, but he failed to establish the priority of the Chicago printing and that it contained 120 pages. He notes a Chicago printing in an expanded edition with 120 pages, but with a different title and a date of 1892. An indication of the rarity of this printing. A great resource on the subject. Light wear to the spine ends, small chip to top front corner and at top of rear cover next to the spine, entire spine reinforced with cellophane tape, and a small library stamp to the bottom of the title page and a neat library label affixed to the top of rear cover and dated October, 1882, else a near fine, bright, internally clean copy of a desirable item. Housed in a protective, pseudo-leather, clamshell case with titles stamped in black on the front cover and spine.

It All Happened In Tombstone.
by John P. Clum