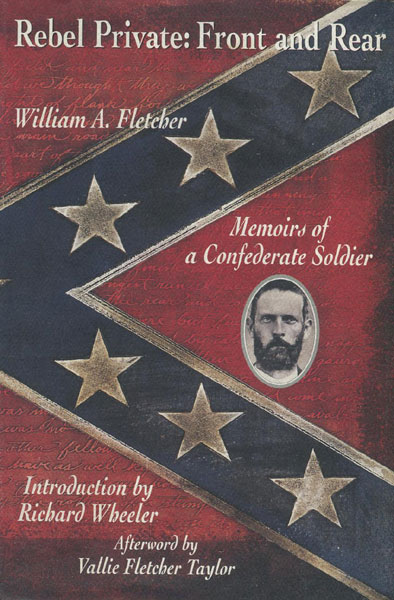 Rebel Private: Front And Rear. Memoirs Of A Confederate Soldier.

by William A. Fletcher

First edition thus. 8vo. Originally published in 1908. Two-tone paper over boards, tan endpapers, xv, [blank], 223 [1] pp., acknowledgments, introduction, afterword. Introduction by Richard Wheeler. Afterword by Vallie Fletcher Taylor. Best edition of a book originally published in 1908, in Beaumont, Texas and now considered rare. The afterword is provided by Fletcher's great granddaughter. William Andrew Fletcher was born in St. Landry parish, Louisiana, in 1839. In 1856 the family moved to Texas, where they settled first at Wiess's Bluff in Jasper County and in 1859 at Beaumont. In 1861 Fletcher joined Company F, Fifth Texas Regiment, Hood's Texas Brigade, at Richmond, Virginia. He fought at Chickahominy, Seven Pines, and around Richmond, served as the commanding general's scout at the battle of Gaines' Mill, and was wounded at the second battle of Manassas. He returned to the front, took part in the battle of Fredericksburg, and was made a temporary corporal. In 1863 he fought with Robert E. Lee's army and with James Longstreet's corps at the Round Tops and at Gettysburg. Under Joseph E. Johnston he was wounded again at Chickamauga. In 1864 he joined Company E of the Eighth Texas Cavalry (Terry's Texas Rangers) and accompanied the unit on campaigns in Tennessee and Georgia. He was captured briefly but escaped near Murfreesboro, Tennessee, and last served with Johnston's army near Bentonville, North Carolina. After Lee surrendered, Fletcher returned to Texas where he owned a successful lumber business until his death in the early 1900s. Fletcher's remembrances has been hailed by historians as a classic and indispensable work of a common foot soldier who happened to have fought in many of the war's most dramatic engagements. Howes F194 says, "Best personal narrative by a Confederate private. Most of the [original] edition was destroyed by fire." Fine in dust jacket.

The Road West, Saga Of The 35th Parallel
by Bertha S. Dodge

The Lost Crucifix Of Our Lady Of Guadalupe
by Fisher Alsup