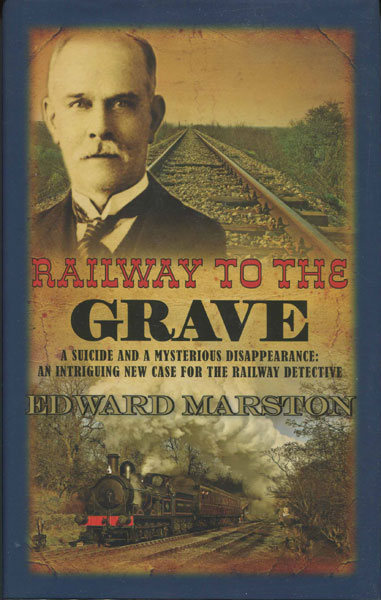 Railway To The Grave.

Other works by EDWARD MARSTON

First edition. Signed by the author on the title page. Fine in fine dust jacket. Yorkshire 1855. Colonel Aubrey Tarleton is a man respected by his neighbors in the small Yorkshire village of South Otterington - as much for his heroic feats in the army as for his social position. So the community is left stunned when Tarleton, deliberately, walks into the path of a speeding train. He is crushed to death on the track, but it is not his broken limbs that attract the attention of the train driver; rather, it is the note pinned to his chest, fluttering in the breeze: 'Whoever finds me, notify Superintendent Tallis of the Detective Department at Scotland Yard'. The famous Railway Detective, Inspector Robert Colbeck, finds his superior officer in great distress when he arrives at the Yard the following morning. Tallis is clutching a letter from his now-deceased friend. In it, Tarleton makes it clear that he no longer wishes to live if he has to do so without his beloved wife, who has disappeared. When the news arrives that a man's body has been found on the track near Thirsk, the coincidence is too great. Was Tarleton responsible for his wife's disappearance, and was his suicide the act of a guilty man? Tallis cannot believe that to be the case and sets out for Yorkshire, accompanied by Colbeck and his trusty Sergeant Victor Leeming, determined to uncover the truth.

A Rope For The Hanging.
NIGEL MORLAND