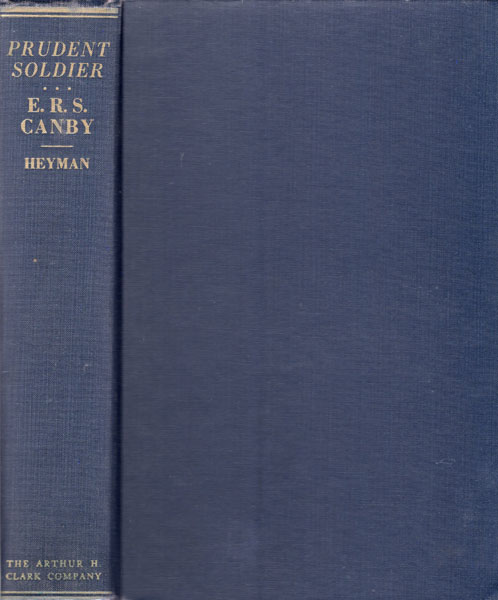 Prudent Soldier, A Biography Of Major General E.R.S. Canby, 1817-1873, His Military Service In The Indian Campaigns, In The Mexican War, In California, New Mexico, Utah, And Oregon; In The Civil War In The Trans-Mississippi West, And As Military Governor In The Post-War South

First edition. Cloth, 418 pp., illus., maps + large folding map at rear. Biblio., index. "This first biography of Canby filled a major gap in the history of major western military figures. Canby was assassinated in 1873 at the hands of Captain Jack while trying to settle the Modoc difficulties in northern California. His life included service throughout the west and this important biography was well received by the academic community and scholars on military history."---Clark/Brunet. Edward Richard Sprigg Canby graduated in 1839 from the U.S. Military Academy. His first military duty was in Florida during the Seminole Wars, later participating in the Native American removal to Oklahoma. Canby would then serve as part of Riley's Brigade in General Scott's Army in the Mexican War, specifically during the siege of Vera Cruz, the Battle of Cerra Gorda, Contreras, and the taking of Mexico City. When the Civil War broke out, Canby was at Fort Defiance. In 1863, Canby was dispatched to New York to settle the draft riots. He was also with Admiral David Farragut during the Battle of Mobile, which resulted in the occupation of Mobile and Montgomery, Alabama. He would accept the surrender of Generals R. Taylor and E.K. Smith, along with their armies - the last two Confederate armies remaining in the field. Canby continued to work for the U.S. government during the Reconstruction, and as security for the District of Columbia. His last appointment on the Pacific Coast led to his ill-fated meeting with the Modoc tribe. On April 11, 1873, Canby road out to meet Captain Jack of the Modoc tribe for a peace meeting. After socializing and passing around cigars, Canby attempted to start the discussion, and Captain Jack signaled his warriors to attacked the emissaries. Canby was killed. He was the only general officer killed during the Indian Wars. Near fine, tight, internally clean copy.

The Border And The Buffalo, An Untold Story …
by John R. Cook

The Cheyenne Saddle. A Study Of Stock Saddles …
by James R. Laird