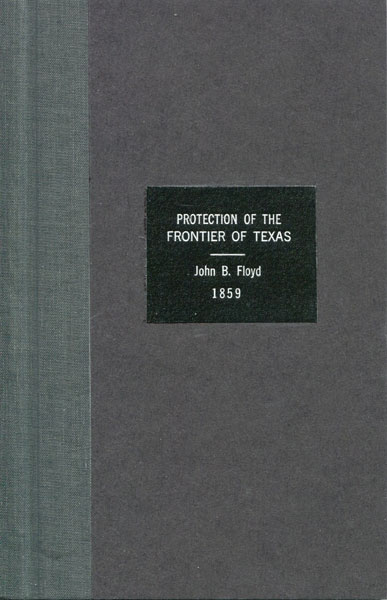 by John B. Floyd

First edition. 8vo. Quarter cloth and boards binder with leather label on front cover and titles stamped in white, 77 pp. House of Representatives, 35th Congress, 2d Session, Ex. Doc. No. 27. Contains 38 different and quite detailed pieces of correspondence regarding Indian troubles throughout Texas in 1858. In the last document addressed to Army Headquarters, General Twiggs states, in part, "For the last ten years the troops for the protection of this frontier have been acting on the defensive, and only pursued Indians when they committed depredations, often successful, but frequently without overtaking them. The policy of establishing posts to protect the country I always doubted; experience has proved satisfactorily to my mind that it will not answer the purpose intended... I propose to change early next spring, with approbation of the general-in-chief, the plan of operations here. Early next spring have all the mounted force concentrated at or near the Wichita, and open a vigorous campaign against the Indians as soon as the mounted force is in the field; concentrate the infantry at some point near the Indian country, breaking up all the posts except those on El Paso mail route, and those only a company of infantry at each. If some five or six mounted companies could be spared to scour the country on the headwaters of the Pecos river, where it is said there are dense forests of timber the Indians retreat to when pursued, it would be of great service... A part of the Comanches, it is said, have crossed the Rio Grande and located themselves in Mexico, and they will doubtless, from there, rob and murder in Texas; if I had the force I would feel no hesitation in following them... I see some indications in the public prints that it is proposed to treat with all the Indian tribes now hostile to the United States. I trust none will be made with the Comanches, as they never have observed any treaty stipulations. They must be made to feel the power of the United States..." Fascinating compilation of documents relating to the tribes' resistance to having their land taken over versus the Manifest Destiny doctrine and the land "rights" of the westward advancing settlement of the frontier. Very good copy.

Some Fatal Accidents In The Atlantic, Baltic, Champion, …
by Clarence J. Monette