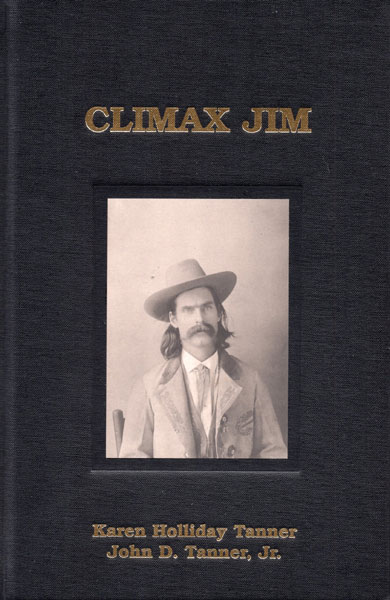 First edition. 8vo. Limited to 50 hardcover copies signed by the authors. This is copy 9.. Black cloth, picture of Climax Jim on front cover, gold stamping on front cover and spine, [12], 102 pp., frontis. [portrait], preface, illustrated, endnotes, bibliography, index. Born Rutherford Nephew in 1876, and named for Rutherford B. Hayes, He acquired the name "Climax Jim" when going on a roundup for a month, he laid in a supply of twelve pounds of Climax chewing tobacco to last him through the time period. Climax Jim went on to become a horse and cattle rustler, an escapologist, and an all-around rascal. He cowboyed for a number of the more prominent ranches of Arizona, New Mexico, and Texas, but somehow the honest way of life was not to be Climax Jim's way. He went on to become Arizona's most famous rustling cowboy. As new, without dust jacket as issued.

The History & Heritage Of Goliad County. Researched …
Jakie L. And Everett B. Cole Pruett [Edited And Written By]