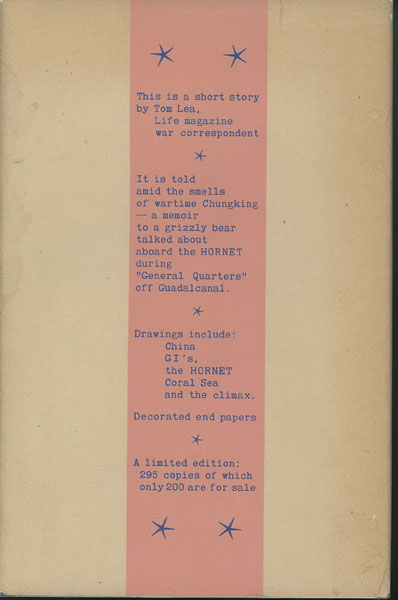 A Grizzly From The Coral Sea

LEA, TOM [CONVERSATION AND PICTURES BY]

Other works by LEA, TOM

First edition. 8vo. Limited to 295 copies. Inscribed on the limitation page "For ... ... from his friend, Tom Lea, August 1944." Green cloth, titles stamped in gilt on the spine, colored and pictorial front and rear endpapers, 32 [2] pp., illustrated. A brief tale about the aircraft carrier the U. S. S. Hornet during World War II in the South Pacific. Tom Lea, at the time, was a Life magazine war correspondent. Lowman 25 says "This book records a conversation in a Chungking restaurant concerning a mountain, a silver coin embossed with the head of a grizzly bear, and a certain General Quarters aboard the carrier Hornet just out of Bougainville." Spine lettering a bit dull, page edges uniformly tanned, else a fine copy lacking the elusive dust jacket.

By The Watermelon Vine, Lindy Lou
ALLEN, THOS S. [WORDS AND MUSIC BY]

Resolutions Of The Legislature Of Minnesota, In Favor …
THOMAS H ARMSTRONG