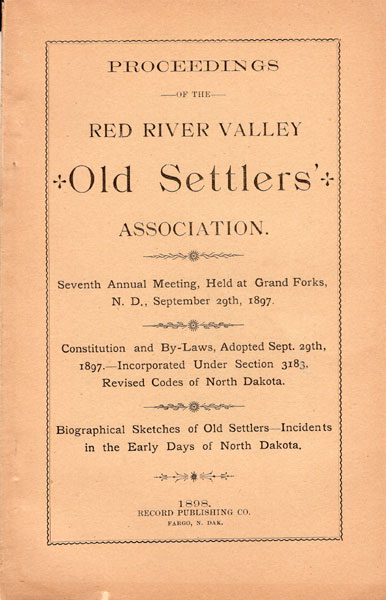 First edition. 8vo. Tan printed wrappers, 40 pp., frontispiece on inside front cover (The old ferry at Grand Forks, 1867), illustrated mostly from photographs, portraits. Booklet discusses the Seventh Annual meeting of the "Old Settlers" association, the constitution and by-laws adopted September 29th and incorporated under section 3183, the revised codes of North Dakota. Also there is much on biographical sketches of Old Settlers including prominent incidents recalled in the early days of North Dakota. Discussions of the coming of the railroad, Indian wars, hardships among the early settlers, the oldest settler, Fort Abercrombie as a place of refuge for the early settlers, Winship Hotel and Budge's Tavern are discussed, and much more. A tiny nick to bottom edge of front cover, else a near fine solid copy.

Southern And Western Texas Guide For 1878.
JAMES L. AND W. I. SMITH ROCK