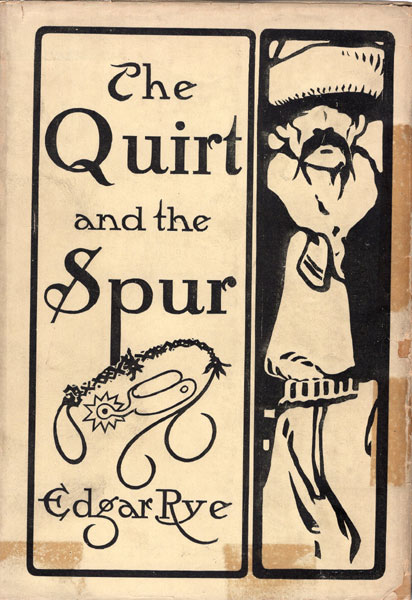 The Quirt And The Spur; Vanishing Shadows Of The Texas Frontier

First edition. 8vo. Original pictorial, decorated cloth, (1) 363 pp., preface, illustrated, frontispiece, [portrait], 19.9 x 14.4 cm. A well-regarded series of sketches of West Texas in the late nineteenth century, with much on Shackelford County and Fort Griffin, cattle ranching and outlaws. Six Score 95 says, "This book has become rare because a prominent ranching family felt themselves slandered by some remarks in it and destroyed all the copies they could purchase." Herd 1982 says, " Wild days of the cowboy and buffalo hunter around Fort Griffin, Texas." Six Guns 1923 says, "A history of Fort Griffin, Texas, in its wild days, containing material on the early life of John Selman and John Larn." A fine, bright, tight copy in the elusive dust jacket that has been reinforced on the verso with archival tape with some bleed-through to show on the spine and flap fold areas, and a small chip at the foot of the rear cover. Very scarce in the elusive dust jacket.

One Man's Montana, An Informal Portrait Of A …
by John K Hutchens

The First Presbyterian Church Of Casa Grande.
by Charlotte. Johnson