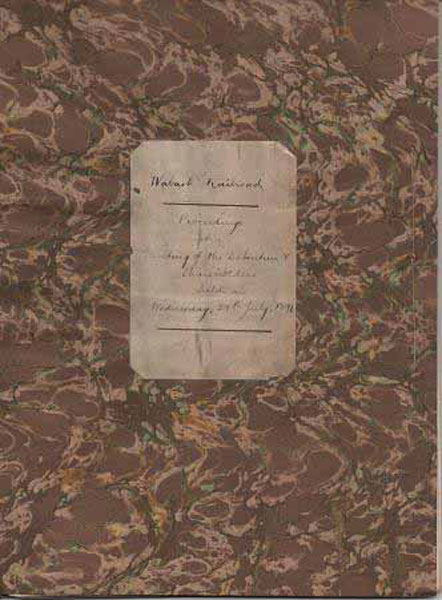 13" x 8 1/4" original manuscript sewn into brown marbled wrappers with the original paper label mounted on the back cover rather than the front. 56pp, small folio, neatly handwritten in sepia ink on lined paper. This document reports on the proceedings of a committee that met in London to "represent the interests of the Wabash debenture holders." Members of the committee are named. James F. Joy gives the speech. "Known to be a captivating speaker and shrewd businessman, James Frederick Joy became a leader in the North American railroad industry during its early years. In 1867 he was elected President of the Michigan Central Rail Road. Responsible for over 1600 miles of tracks in Michigan alone, Joy oversaw the expansion of railways through various states as well as Canada, even overseeing the construction of the first railway bridge over the Missouri River. His dominance of the railroad industry in the region earned him enemies, however, and in 1876 William Vanderbilt bought the majority stock of the Michigan Central and voted Joy out of the presidency. Around the same time James became Director of the Second National Bank of Detroit, which later became Detroit National Bank, and following his removal from the Michigan Central he bought the Wabash Railroad and formed the Detroit Union Depot Company to manage its local assets." The topic was a proposed extension of the Wabash Railway from Detroit to Chicago. Discusses other railroads and how extensions of their railroads have profited each. "There is a road built from Chicago to Port Huron a little north of Detroit, belonging to the Grand Trunk. It is called the Chicago and Grand Trunk. It is compelled by law to report to the Railway Commission of Detroit the earnings of that road between Chicago and Port Huron - that is the point terminating on the St. Clair River. It earned last year between $2,000,000 and $3,000,000, and it earned net between $900,000 and $1,000,000. That is a road a little longer than the one we shall have when our extension is built..... I shall be greatly surprised if within four or five years we do not earn that net on that road." Report insists that if the extension is built, security holders will soon receive large dividends. Most of the extension would run through level, fertile country, and local business will surely grow. Discusses rate cutting. "What will happen is we don't build it? There it is -- a link which certainly has to be built, Parties are already at work in America to get upon that line so as to gain a position where they can levy blackmail upon us." Several pages of concerns voiced by individual shareholders are responded to by Mr. Joy. Concludes with resolution ... "This meeting, having heard the statement of Mr. Joy with regard to the construction of the Detroit section, and taking into consideration the information contained in the report made by Mr. Morrison, and the assurances given by Mr. Joy that the net surplus earnings of the Wabash road, as published from mouth to mouth, would not be diverted for betterments, resolves that the question of the immediate construction of this section, or the postponement thereof, be left to the decision of the board of the Wabash Company in New York." Top corner of first page missing 1 1/2," though not affecting text. Light wear to pages and wrappers. Very good. A very interesting and informative document.

The Sign Of The Arrow Head. Legends And …
San Pedro, Los Angles And Salt Lake Railroad