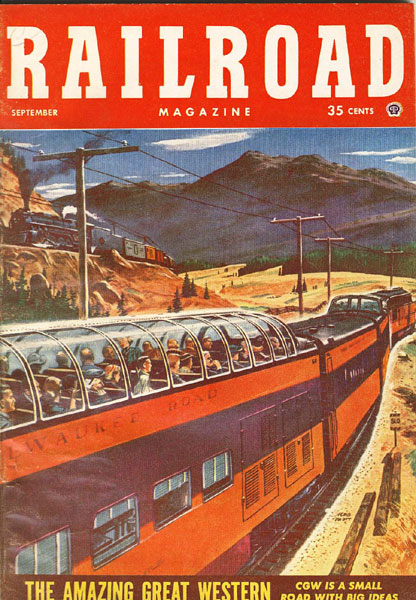 Railroad Magazine, September, 1953, Vol. 61, No. 4. 8vo. Color pictorial wrappers, 132 pp. including wrappers. Many illustrations. Articles include The Amazing Great Western describing the CGW or the Chicago Great Western which served Illinois, Iowa, Minnesota, Missouri and a very small portion of Nebraska and Kansas; Locomotives of the Canadian Pacific describes the specifics of their steam engines; New York Central - 100 Years of Steam by Robert C. Schmid talks about how the New York Central Railroad was formed in 1853 by taking possession of ten short railroads in New York State between Albany and Troy on the east and Buffalo and Niagara Falls on the west.; Angus, the Scot by Hugh G. Jarman is an article about the Canadian Pacific Railway car wheels; The Rise and Decline of the Midwest Interurban by Prof. John F. Due. As a transitional step from the main-line railroad to the car, bus and truck for short distance travel, it provided a huge contribution to the economical development of the area. Beautiful, bright cover art by Herb Mott, and a near fine copy.

Southern Trails To California In 1849
Ralph P. Bieber [Edited By]

Six-Gun In Cheek - An Affectionate Guide To …
by Bill. Pronzini

The Spanish Regime In Missouri
by Louis Houck