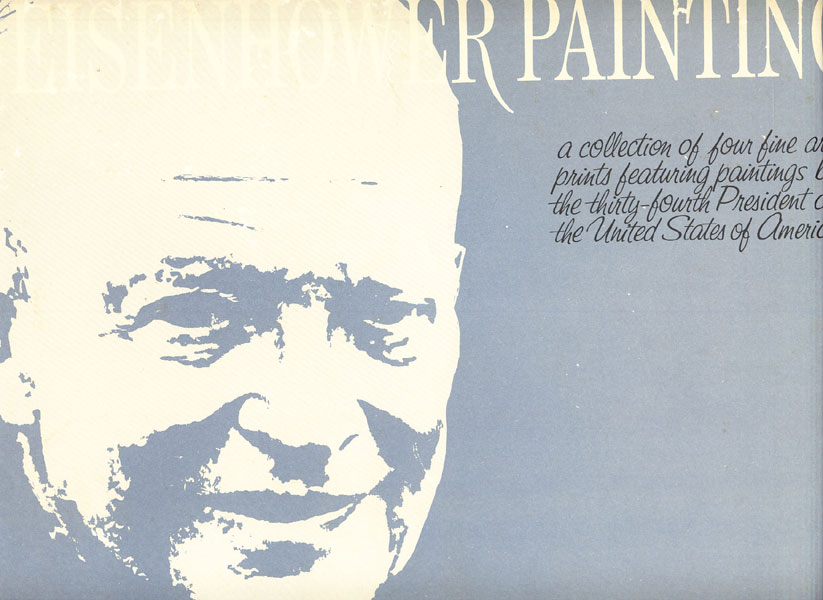 The Eisenhower Paintings. A Collection Of Four Fine Art Prints Featuring Paintings By The Thirty-Fourth President Of The United States Of America

12 1/4" x 16 1/2" light blue portfolio with an illustration of Eisenhower's head in white. Houses 4 12" x 16" colorful prints. "Dwight D. Eisenhower's paintings were created for his own personal pleasure. Some were done as gifts. Some were created on impulse in rare moments of leisure. With typical humility, the General made no claim to the skills of a professional artist. He refers to his paintings as "daubs," the result of his love of color and an inclination to try something new. The public sees them as milestones in a distinguished career that has led from the farmlands of Kansas and Texas to the global arenas where the destiny of man is shaped. This portfolio includes four of the General's most distinctive works: MOUNTAIN LAKE, painted in 1956 and copied from a magazine illustration (owned by Mr. William E. Robinson); A FRENCH GARDEN, done in Paris in 1952 as a gift from the General to his newborn granddaughter (owned by Susan Elaine Eisenhower); DESERTED BARN, painted at the Eisenhower farm in Gettysburg in 1958 (owned by Mr. Walter A. West); and WINTER BIRCHES, a wedding anniversary gift in 1963 from the General to two of his closest friends (owned by Hon. Floyd B. Odlum and Mrs. Jacqueline Cochran Odlum). The General requested that all royalties from these paintings be assigned to Eisenhower College in Seneca Falls, New York." Cover of the portfolio is worn with rubbing, chipping and closed tears at spine. Good. Prints are in very good plus condition with minor wear to corners and with browning to rears of 2 prints. All prints with wide margins for framing.

Lima, The History
by Eric Hirsimaki

What Ever Happened To Baby Harry? The True …
by Melissa Ruffner

The Water-Power Of Maine
by Walter Wells